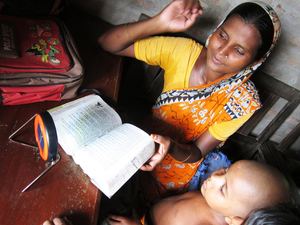 SAN FRANCISCO, Mar. 24 /CSRwire/ - d.light, a for-profit social enterprise that manufactures and distributes solar lighting and power products with primary markets in the developing world, today announced that Donn Tice, Chairman and CEO, along with cofounders Ned Tozun, President, and Sam Goldman, Chief Customer Officer, were named Social Entrepreneurs of the year 2014 by the Schwab Foundation for Social Entrepreneurship. d.light, along with 37 other individuals and organizations in the 2014 class, will be fully integrated into the events and initiatives of the World Economic Forum.

“We are honored to be recognized by the Schwab Foundation as the 2014 Social Entrepreneurs of the Year,” said Donn Tice, Chairman and CEO, d.light. “This award is a testament to the increasing role that social enterprises—which focus on market-based solutions to the biggest social challenges of our time—play in the world economy.” With the 2014 award, d.light joins the Schwab Foundation’s prestigious community of social entrepreneurs, which includes 250 people from 60 countries. Together, the foundation’s community of social entrepreneurs will participate in World Economic Forum initiatives, conversations shaping the future agendas of industries, and serve experts for the Forum’s Global Agenda Councils.

The Schwab Foundation award caps a recent series of recognitions for d.light’s outstanding leadership in social enterprise. Last week, d.light was named as a B Corp “Best for the World” company, based on overall global impact on community, workers and environment. As one of the first companies in the world to undertake the Global Impact Investment Rating System’s (GIIRS) d.light was named a Pioneer Company for a rigorous, independent assessment of social and environmental impact. In the last year, d.light was also acknowledged as a Bloomberg New Energy Pioneer (2013) and awarded the $1.5 million Zayed Future Energy Prize (2013).

About d.light
Founded in 2007 as a for-profit social enterprise, d.light manufactures and distributes solar lighting and power products designed to serve the more than 2 billion people globally without access to reliable electricity. Through over a dozen field offices and four distribution hubs in Africa, China, South Asia and the United States, d.light has sold 6 million solar light and power products in nearly 60 countries, improving the lives of nearly 30 million people. d.light is dedicated to providing the most reliable, affordable and accessible solar lighting and power systems for the developing world and reaching 100 million people by 2020. For more information see www.dlightdesign.com.

About the Schwab Foundation
The Schwab Foundation for Social Entrepreneurship was cofounded by Klaus Schwab, Founder and Executive Chairman of the World Economic Forum, and his wife, Hilde. Since its inception in 2000, the Foundation has been identifying the world’s leading social entrepreneurs and involves the community of 200 award winners in advancing social innovation in collaboration with corporate, government and academic stakeholders.

About the World Economic Forum
The World Economic Forum is an independent international organization committed to improving the state of the world by engaging business, political, academic and other leaders of society to shape global, regional and industry agendas. Incorporated as a not for-profit foundation in 1971 and headquartered in Geneva, Switzerland, the Forum is tied to no political, partisan or national interests. www.weforum.org