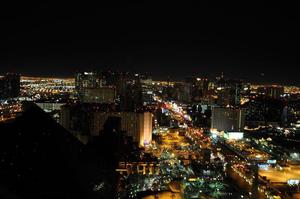 Exterior lighting, rooftop signage, marquees and front features at the Company’s major Strip resorts and Beau Rivage Resort and Casino in Biloxi, Miss. will be turned off during the celebration. Las Vegas’s most iconic resorts will unite with some of the world’s other famous worldwide landmarks – such as the Eiffel Tower, Burj Khalifa and the Empire State Building – in dimming their lights to promote energy conservation.

“This event is an opportunity for us to join with others all over the world, to unite in a common mission and illustrate our commitment to the planet,” said Cindy Ortega, MGM Resorts Senior Vice President and Chief Sustainability Officer. “Yet environmental responsibility is not just a one-hour observance. It is a year-round priority for MGM Resorts that reaches into every aspect of our business.”

EARTH HOUR begins in New Zealand and progresses around the world, culminating in the Pacific Time Zone of the United States.

The company has saved 420 million kilowatt hours of energy in the past five years at its resorts – equivalent to 37,000 homes annually or 228,000 metrics tons of CO2E.

In 2009, CityCenter – which includes ARIA, Vdara and The Shops at Crystals – was awarded six LEED Gold certifications for sustainable design and construction from the U.S. Green Building Council. In 2012, MGM Resorts was awarded 15 Green Key Hotel rankings for designation of green business operations. Also, in 2012, Green Key Global’s Meetings Program awarded the “5 Green Keys” rating to the meetings and convention spaces within Bellagio, ARIA, Mandalay Bay and MGM Grand Las Vegas. For three consecutive years, MGM Resorts has been listed as the highest ranking company in the casino-resort industry among Newsweek Magazine’s 500 most environmentally responsible companies.

Additionally, MGM Resorts recently announced the planned installation of one of the largest rooftop solar photovoltaic arrays in the world at the Mandalay Bay Resort Convention Center. The 6.2-megawatt installation will be MGM Resorts’ first commercial solar project in the United States and will generate enough electricity to power the equivalent of 1,000 homes.

About EARTH HOUR
EARTH HOUR is organized by the World Wildlife Fund: www.earthhour.org/join-the-hour.