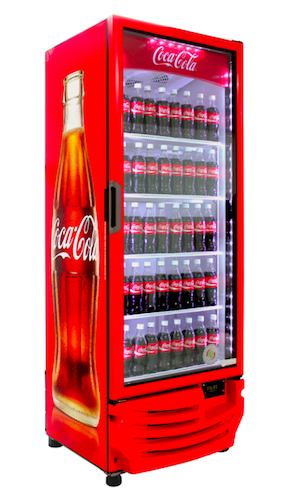 One of the HFC-free cooler models
Coca-Cola is using for new
equipment placements globally.

The Coca-Cola Company today announced that it has installed its 1 millionth hydrofluorocarbon (HFC)-free cooler using natural refrigerant in the marketplace, preventing the emission of 5.25 million metric tons of CO2 over 10 years. This milestone marks significant progress in the Company’s effort to phase out the use of HFC refrigerant—a well-known contributor to climate change—in Coca-Cola dispensers, vending machines and coolers globally. Together with its bottling partners, the Coca-Cola system has established a goal that all new cold-drink equipment will be HFC-free by 2015. Achieving this goal will prevent the emission of more than 50 million metric tons of CO2 over 10 years, an amount equivalent to the annual emissions of more than 10 million passenger vehicles. Coca-Cola has improved its cooling equipment energy efficiency by 40 percent since 2000; and eliminated 75 percent of direct greenhouse gas (GHG) emissions by transitioning to HFC-free insulation foam for new equipment.

"Over the past decade we have invested more than $100 million to make our coolers better for the environment," said Jeff Seabright, Vice President, Environment & Water, The Coca-Cola Company. "And we have significantly reduced our overall carbon footprint. Through investment in research, development and commercialization efforts we’ve advanced the use of more energy-efficient, HFC-free cooling technologies and energy management systems. We’ve made sustainable refrigeration the cornerstone of our climate protection and energy management efforts."

In 2013, Coca-Cola placed approximately 230,000 units of HFC-free equipment, bringing the global total to 1 million. While HFC-free placements are scaling-up worldwide, Europe and Japan have been market leaders for Coca-Cola to date.

“Our climate milestones are the result of collaboration between our Company, our bottling partners, our suppliers and our customers,” said Seabright. “The sustainability of our planet depends on more than us; it requires collective action, which is why we work with governments, organizations and other companies to advance solutions for climate protection. Only together can we successfully attempt to tackle challenges of this magnitude.”

This work complements the most recent goal set by the Company to reduce the carbon footprint of "the drink in your hand” by 25 percent by 2020. This goal includes working to reduce the greenhouse gas emissions across the entire value chain of Coca-Cola’s products by making comprehensive reductions in manufacturing processes, packaging formats, delivery fleet, refrigeration equipment and ingredient sourcing.

In 2009, Coca-Cola set a goal that 100 percent of its new coolers and vending machines will be HFC-free by 2015 with support from Greenpeace. The Company also played an active role in setting the Consumer Goods Forum goal to begin phasing-out HFC refrigerants in cooling equipment across its 400-member companies starting in 2015.

About The Coca-Cola Company
The Coca-Cola Company (NYSE: KO) is the world's largest beverage company, refreshing consumers with more than 500 sparkling and still brands. Led by Coca-Cola, one of the world's most valuable and recognizable brands, our Company's portfolio features 16 billion-dollar brands including Diet Coke, Fanta, Sprite, Coca-Cola Zero, vitaminwater, Powerade, Minute Maid, Simply, Georgia and Del Valle. Globally, we are the No. 1 provider of sparkling beverages, ready-to-drink coffees, and juices and juice drinks. Through the world's largest beverage distribution system, consumers in more than 200 countries enjoy our beverages at a rate of 1.9 billion servings a day. With an enduring commitment to building sustainable communities, our Company is focused on initiatives that reduce our environmental footprint, support active, healthy living, create a safe, inclusive work environment for our associates and enhance the economic development of the communities where we operate. Together with our bottling partners, we rank among the world's top 10 private employers with more than 700,000 system associates. For more information, visit Coca-Cola Journey at www.coca-colacompany.com, follow us on Twitter at twitter.com/CocaColaCo, visit our blog, Coca-Cola Unbottled, at www.coca-colablog.com or find us on LinkedIn at linkedin.com/company/the-coca-cola-company.