New Study Shows Ortiz Mine Proposal Is Thirsty and Dirty: Could Consume Water Equal to Use of 7,800 New Mexicans

The Ortiz Mine Proposal could also contribute to climate change and drain acid into surrounding watershed in perpetuity; New jeweler/conservationist coalition fights against dirty gold

New Study Shows Ortiz Mine Proposal Is Thirsty and Dirty: Could Consume Water Equal to Use of 7,800 New Mexicans

The Ortiz Mine Proposal could also contribute to climate change and drain acid into surrounding watershed in perpetuity; New jeweler/conservationist coalition fights against dirty gold 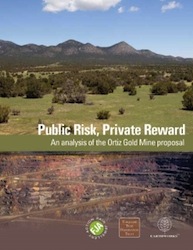 The coalition, which represents the first time in New Mexico that jewelers and conservationists have combined forces to oppose irresponsible mining, is comprised of Earthworks, Fair Jewelry Action, and the Turquoise Trail Preservation Trust.

Reviewed and endorsed by one the country’s leading scientists on the environmental impacts of gold mining – Dr. Glenn Miller of the University of Nevada, Reno – the report indicates that:

“As we cope with horrible drought, why are we considering a gold mine that would consume enough water to sustain thousands of people?” asked Earthworks’ Southwest Circuit Rider, Pete Dronkers, the report’s author. “And as global warming becomes a bigger and bigger problem, why would we permit a mine that would release hundreds of millions of pounds of greenhouse gases?”

“The thought that I could end up selling a wedding ring with gold that turned the Ortiz Mountains into a polluted industrial zone is repulsive,” said Marc Choyt, President of Santa Fe-based Reflective Images – a jewelry design and retail company – and co-founder of Fair Jewelry Action. He continued, “Dirty, conflict ridden gold has become too common in the jewelry sector, which is why jewelers of conscience must speak up against mining companies and produce jewelry made with artisan-scale fair trade gold and recycled precious metals.”

The campaign against the Ortiz mine proposal is sponsored by the Turquoise Trail Preservation Trust, an organization dedicated to support the region’s unique beauty, economy and historic heritage.

“Santa Fe Gold’s mine would scar the Ortiz Mountains with a huge open-pit visible for miles on our National Scenic Byway.” said Mike Madden, President of the Turquoise Trail Preservation Trust. “Not only would the mine destroy the viewshed, but it would also increase truck traffic along the Turquoise Trail, which has become a popular recreational and tourist destination.”

Fair Jewelry Action is an environmental justice and human rights network promoting traceable and transparent sourcing within the jewelry sector.

Earthworks is an environmental nonprofit dedicated to protecting communities and the environment from the destructive impacts of resource extraction while seeking sustainable solutions.

The report is available online at ortizreport.earthworksaction.org.

Fair Jewellery Action is a Human Rights and Environmental Justice Network within the jewellery sector. FJA promotes ethical and fair trade jewellery business by advocating traceability and transparency in the jewellery supply chain. FJA's objective is to direct more of the economic impact of the jewellery sector toward the regenerating of local economies in small-scale artisan producer communities and in support of cultural integrity and environmental sustainability.

Through its communications platform and standard setting activities, FJA is a driving force to consumers, campaigning for ethically and fairly traded jewellery as the only moral choice. FJA will support jewellers by connecting them with the source of their material and enabling them to see the social, environmental and market advantage of providing ethical products.

Fair Jewellery Action is a programme of the CRED Foundation.