Thousands Expected to Celebrate at one of the Nation’s Largest Annual Parades Honoring Dr. King 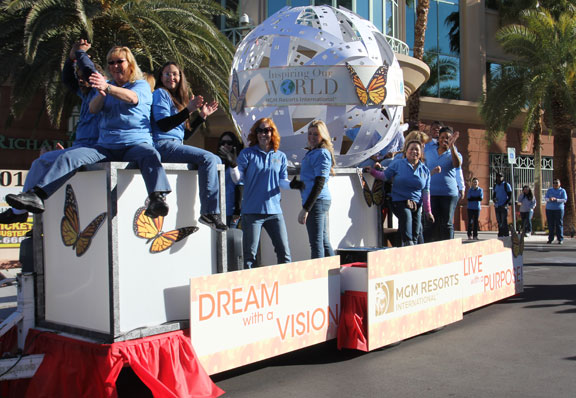 MGM Resorts International (NYSE: MGM) will return as the presenting sponsor of the 32nd Annual Dr. Martin Luther King, Jr. Parade to be held on Monday, Jan. 20 at 10 a.m. in downtown Las Vegas.

Hailed as one of the nation's most popular annual parades celebrating the ideals and life of Dr. King, thousands are expected to line the Fourth Street parade route to commemorate Dr. King's legacy of promoting equal and human rights. The theme for this year’s parade is “Living the Dream: Celebrating the Legacy; Daring to Dream.”

“MGM Resorts stands committed to advancing Dr. King’s dream of a world where every American, and every human being, has equal rights to pursue life, liberty and happiness,” said Jim Murren, Chairman and CEO of MGM Resorts International. “We proudly join the community in honoring Dr. King’s historic legacy and supporting the ideals he so boldly stood for.”

In 2000, MGM Resorts became the first company in the gaming industry to adopt a formal diversity initiative. This is the fourth consecutive year MGM Resorts has served as the parade’s presenting sponsor. The Company has supported the Dr. Martin Luther King, Jr. Parade since 2003.

Wendell Williams, Founder of the nonprofit Dr. Martin Luther King, Jr. Committee, expects this year's event to be one of the most diverse ever, with 130 entries anticipated, including floats, marching bands, dancers, and motorcades featuring both cars and motorcycles. Public officials and representatives of area nonprofit organizations are also expected to participate in the event.

“Dr. King was one of the world's greatest human rights leaders. His blueprint for peace is still important today. The Dr. Martin Luther King Jr. Committee of Las Vegas is proud and honored to team with MGM Resorts International to continue his dream,” said Williams.

Employee volunteers from MGM Resorts are expected to turn out in full force to march in the parade with an MGM Resorts float created by the Company’s Events department.

MGM Resorts International (NYSE: MGM) is one of the world's leading global hospitality companies, operating destination resort brands including Bellagio, MGM Grand, Mandalay Bay and The Mirage. The Company also owns 51% of MGM China Holdings Limited, which owns the MGM Macau resort and casino and is in the process of developing a gaming resort in Cotai, and 50% of CityCenter in Las Vegas, which features ARIA resort and casino.  For more information about MGM Resorts International, visit the Company's website at www.mgmresorts.com.

MGM Resorts International (NYSE: MGM) is one of the world's leading global hospitality companies, operating a peerless portfolio of destination resort brands, including Bellagio, MGM Grand, Mandalay Bay and The Mirage. In addition to its 51% interest in MGM China Holdings, Limited, which owns the MGM Macau resort and casino and is in the process of developing a gaming resort in Cotai, the Company has significant holdings in gaming, hospitality and entertainment, owns and operates 15 properties located in Nevada, Mississippi and Michigan, and has 50% investments in three other properties in Nevada and Illinois. One of those investments is CityCenter, an unprecedented urban resort destination on the Las Vegas Strip featuring its centerpiece ARIA Resort & Casino. Leveraging MGM Resorts' unmatched amenities, the M life loyalty program delivers one-of-a-kind experiences, insider privileges and personalized rewards for guests at the Company's renowned properties nationwide. Through its hospitality management subsidiary, the Company holds a growing number of development and management agreements for casino and non-casino resort projects around the world.

MGM Resorts International supports responsible gaming and has implemented the American Gaming Association's Code of Conduct for Responsible Gaming at its gaming properties. The Company has been honored with numerous awards and recognitions for its industry-leading Diversity Initiative, its community philanthropy programs and the Company's commitment to sustainable development and operations. For more information about MGM Resorts International, visit the Company's website at www.mgmresorts.com.

Connect with MGM Resorts International on: