The Needle in the Haystack: Hispanic Inclusion on Corporate Boards 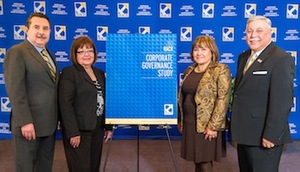 The HACR CGS measures Hispanic inclusion in the C-Suite and boardrooms in Fortune 500 companies. The HACR CGS is a publication of the HACR Research Institute (HRI), the research arm of HACR, which is devoted to objective research and analysis of Hispanic-related issues in Corporate America.

“I commend HACR’s 2013 Corporate Governance Study for reiterating the importance of Latino leadership and inclusion at the highest levels of companies across the nation – a priority I share and have pursued as Chairman of the Senate Democratic Hispanic Task Force,” Sen. Robert Menendez, D-N.J. said. “A more diverse boardroom is not only a portrait of American success, it is also good for business and a company’s bottom line. I look forward to continuing to partner with HACR to increase corporate diversity and promote Latino leadership at all levels of our economic, political, and social sectors.”

This year’s HACR CGS shows that although Hispanics have made certain gains in the number of seats held in the boardroom, those gains are still a small percentage of the overall total of eligible seats. Between 1993 and 2007, there was significant momentum in Hispanic representation in the corporate boardroom. However, 2013 data suggests the momentum has been lost and it is important to highlight these gains were minimal and not representative given the size and consumer strength of the U.S. Hispanic population.

“Companies such as American Express, Apple, ExxonMobil and Sears should be embarrassed their boards exclude Hispanics despite a demographic of 60 million consumers with a buying power of $1.3 trillion,” HACR President & CEO Carlos F. Orta said. “The lack of Hispanic inclusion doesn’t bode well for shareholder value given the U.S. Hispanic consumer is the 14th largest economy in the world.”

To view the 2013 HACR CGS click here. The study can also be found on HACR’s website, www.hacr.org.

About the Hispanic Association on Corporate Responsibility
Founded in 1986, the Hispanic Association on Corporate Responsibility (HACR) is one of the most influential advocacy organizations in the nation representing 16 national Hispanic organizations in the United States and Puerto Rico. Our mission is to advance the inclusion of Hispanics in Corporate America at a level commensurate with our economic contributions. To that end, HACR focuses on four areas of corporate social responsibility and market reciprocity: Employment, Procurement, Philanthropy, and Governance.