Donation more than doubles previous record and will provide 768,468 meals to Southern Nevadans in need 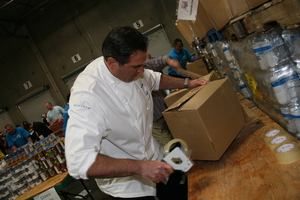 Three Square reported that 922,161 pounds – more than 461 tons – of food was donated during a campaign in October across MGM’s Nevada resorts and corporate operations. This is the fourth consecutive year the company’s food drive has set a new donation record, which will provide 768,468 meals to the nearly 100,000 individuals Three Square serves monthly through its 600 Program Partners.

“We are so thrilled at the outcome of this year’s food drive, which totals more food donated than the accumulation of the past three years,” said Brian Burton, President and CEO of Three Square. “This is the most substantial amount of food we’ve ever received in a single donation and our agency partners will be so excited to see such generosity come their way. Our partnership with MGM Resorts has been such an asset to our organization, and we are deeply grateful for their commitment to ending hunger in our community.”

Feeding America, the leading hunger relief charity in the United States, confirmed that MGM Resorts’ 2013 food drive is the largest single company-executed food drive on record within its network of over 200 food banks across the country. Three Square is a member of Feeding America, which annually provides hunger challenged families and relief organizations with more than three billion pounds of food and groceries.

MGM Resorts and Three Square celebrated the milestone donation during a special ceremony yesterday at the Three Square warehouse where the donations are being prepared for distribution. MGM Resorts has a history of setting new Three Square donation records, starting in 2010 when an employee canned food drive collected 38 tons of food to benefit Three Square. Following that milestone, and to recognize additional levels of MGM Resort support, the “MGM Resorts Volunteer Room” was established at the food bank and has served as a vital space to the food distribution process.

“This week we enter a season during which the word ‘community’ has greater meaning. I cannot think of a better way to honor the coming holiday than through this caring and generosity,” said Jim Murren, Chairman & CEO of MGM Resorts International.

Monday’s event marks the culmination of a month-long competition between Las Vegas MGM Resorts properties and corporate operations. The winning property was selected by dividing the total food weight each property donated by the number of employees at the property, to reach the number of pounds donated per employee. Bellagio won the competition, having raised an astounding 51.39 pounds of food per employee. Last year’s winning resort, Mandalay Bay, came in second this year with 27.57 pounds per employee.

About Three Square Food Bank
Established in 2007 to provide hunger relief, Three Square Food Bank offers wholesome, nutritious food to non-profit and faith-based organizations, schools and feeding sites that serve a wide range of Southern Nevadans. A national model project inspired by Eric Hilton with a grant provided by the Conrad N. Hilton Foundation, Three Square is a community collaborative partnership with businesses, non-profit agencies, food distributors, higher education institutions, the Clark County School District, governmental entities, the media and thousands of volunteers to efficiently and effectively serve hope to those in our community struggling with hunger. Three Square currently provides more than 26 million pounds of food and grocery product – the equivalent of more than 21 million meals – per year to nearly 600 Program Partners. Three Square is a member of the Feeding America network of food banks. For additional information visit www.threesquare.org. For the latest news and events on Three Square, visit www.facebook.com/ThreeSquareFoodBank and follow them on Instagram (@threesquarelv) as well as Twitter (@threesquarelv).