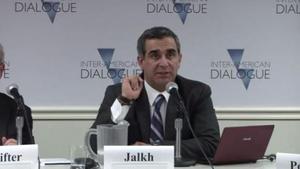 WASHINGTON, Nov. 19 /CSRwire/ - The President of the Judicial Council in Ecuador, Gustavo Jalkh, assured that the ratification of the verdict for environmental damage against the U.S. oil company Chevron by the Ecuadorian National Court of Justice (CNJ) is a sign of “total independence of its judges”.

"The judges have ruled with full independence in their criteria (….) Sometimes a sign of said independence is that the decision is not appreciated by one group or another, in the sense that it hasn’t been reached to favor” any of the parties, he said in regards to the Court’s decision to lower in half the compensation amount that the oil company has to pay.

In an interview with EFE, Jalkh insisted that in the Chevron case – whose private nature he noted, despite its great public impact – the CNJ showed through its ruling of the 12th “not only its external independence, but also its internal independence”, since it reduced the verdict set by a lower instance.

“What the Court has done is, in its legal basis, to establish that it has partially cassated the verdict and consider that, one, there are environmental damages and responsible parties and, two, that some part of that fine is not pertinent under Ecuador’s legislation”, he explained.

Chevron, which appealed the verdict before the supreme instance, didn’t apologize publicly as required by the Sucumbíos Court, so the amount was greater than USD $19,000 million, although the CNJ eliminated the clause on the apology (punitive damages), so the amount was cut down in half again.

Modernization of justice
In his presentation at the headquarters of Inter-American Dialogue, where he was invited to discuss the “Perspectives of amendments to Ecuador’s judicial system”, Jalkh presented the 2013-2019 strategic plan, with emphasis on Ecuador’s judicial reform.

He explained that the plan’s goals are to ensure transparency and quality in the provision of justice services, promote optimum access to justice, institutionalize ‘meritocracia’ (merit-based appointments) as a service standard in the judiciary, and secure institutional independence.

In his presentation he noted the high investment levels devoted to reform the judiciary, well above the average in other Latin American countries.

He also highlighted permanent improvement and modernization of services through a national mediation service, through the implementation of 51 Mediation Centers and 100 mediators nationwide.  Likewise, he reported on the increase of judges, defense attorneys and prosecutors.

In regards to the concentration of justice services, the efficiency and efficacy of judicial procedures, he noted the benefits of the new management model, which have allowed reducing the average time to resolve cases from 191 to 47 days.

Rule of law
Jalkh emphasized that Ecuador is a country under the Rule of law and, thus, protest and opinions are guaranteed.  “What is true is that what cannot be done in Ecuador is commit crimes.  People may protest – with or without reason – but what cannot be done is to cut a police officer’s ear, as it has happened, burn an ambulance or stop a public service”, he quoted.