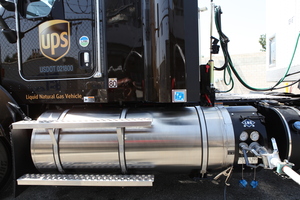 ATLANTA, Oct. 08 /CSRwire/ - UPS® (NYSE:UPS) announced today plans to invest approximately $50 million to build an additional nine liquefied natural gas (LNG) fueling stations, bringing the total number of stations to 13. Four were announced in April, and all should be operational by the end of 2014.

The enhanced LNG fueling infrastructure will support the operation of approximately 1,000 UPS LNG tractors that will displace more than 24 million gallons of diesel fuel annually. UPS has used LNG vehicles for more than a decade and has benefited from lower fuel prices compared to imported petroleum.

“The natural gas industry needs companies to commit to using natural gas to help establish a reliable alternative to traditional fuel, and that is just what UPS is doing,” said David Abney, UPS chief operating officer. “The UPS strategy is both environmentally friendly and economically viable. LNG is becoming more readily available, plus it’s more insulated from market volatilities than diesel fuel.”

“Building these fueling stations is a solid future investment for UPS,” said Abney. “Since vehicles represent approximately 35 percent of UPS’s carbon footprint, a cornerstone of the company’s environmental strategy is to support the development and use of lower-emission alternative fuels. By 2017, our goal is to reach one billion miles driven by our alternative fuel and advanced technology fleet. To accomplish this goal the company must continue to innovate and help pave the way toward more sustainable transportation solutions.”

The company takes a “rolling laboratory” approach which means it’s always testing different technologies to find the best sources of energy for its vehicles. UPS recently began a pilot program testing propane vehicles in Gainesville, Ga., and over the past year has deployed 20 biomethane vehicles in the United Kingdom. UPS also currently operates approximately 1,000 compressed natural gas (CNG) vehicles and will begin a pilot program testing CNG tractors in early 2014 as it continues to look toward natural gas as a substitute for conventional fuel.

UPS (NYSE:UPS) is a global leader in logistics, offering a broad range of solutions for the transportation of packages and freight, including innovative delivery options for the global consumer market; the facilitation of international trade, and the deployment of advanced technology to more efficiently manage the world of business. Headquartered in Atlanta, UPS serves more than 220 countries and territories worldwide. The company can be found on the Web at ups.com and its corporate blog can be found at blog.ups.com. To get UPS news direct, visit pressroom.ups.com/RSS.