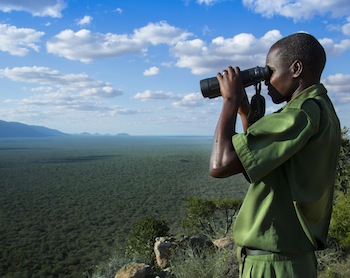 Wildlife Works Carbon llc, was voted best project developer in the forestry category of Environmental Finance and Carbon Finance Magazine’s Voluntary Carbon Market Rankings 2013. The first prize honor was decided through a vote of more than 700 members of the voluntary carbon trade.

The industry rankings recognized the pioneering achievements of Wildlife Works’ REDD+ projects in Kenya and the Democratic Republic of the Congo (DRC) where Wildlife Works currently manages the protection of 1.2M acres of threatened forest that generates 5M tonnes of REDD+ carbon credits on behalf of landowners and 150K people from the local communities.

REDD+, an acronym for Reducing Emissions from Deforestation and Degradation, is an essential climate change mitigation strategy envisioned by the United Nations designed to help stop the destruction of the world’s forests. The “+” represents economic alternatives that provide numerous benefits to local communities who are engaged to participate in protecting their forest for an initial period of 30 years.

According to Mike Korchinsky, Founder and CEO Wildlife Works, “We attribute our success in this year’s rankings by focusing on doing the right thing—no matter how challenging—to ensure REDD+ remains true to its promise to make standing forests more valuable alive than dead for the benefit of forest communities, forest governments and for the planet.”

Korchinsky went on to say, “The way to protect threatened forests is through community engagement where local people receive multiple benefits through conservation-related jobs.”

Each year, 7B tonnes of C02 are released into the atmosphere as 35M acres of forest are destroyed due to slash and burn agriculture, legal and illegal logging and charcoal production. Deforestation accounts for approximately 20% of all greenhouse gas emissions that are causing global warming. Climate scientists broadly agree that the environment cannot be stabilized without protecting threatened forests.

Protecting threatened forests under a REDD+ program generates offsets or carbon credits that when sold, pay for the cost to leave a forest standing instead of going up in smoke. These REDD+ offsets can be used by companies to counterbalance their unavoidable emissions.

Proceeds from the sale of Wildlife Works REDD+ carbon credits are shared with landowners and the local community. “We have established a sustainable and scalable business model that delivers unprecedented environmental and social benefits to seriously impoverished parts of Africa and the world that are in need of the transformational change that Wildlife Works REDD+ projects can bring,” said Korchinsky.

About Wildlife Works
Wildlife Works, headquartered in Mill Valley, CA, is the Voluntary Carbon Market's leading REDD+ project development and management company and the first company in the world to develop a REDD+ project that achieved the core objectives of REDD+ envisioned by the United Nations and did so under the carbon market’s most rigorous third-party verifications for REDD+. Wildlife Works is currently developing a portfolio of high quality REDD+ projects to mitigate 25M tonnes of CO2 emissions annually with projects in Africa, Central America, South America and Asia. For more information, visit: www.wildlifeworks.com.

Wildlife Works is the world's leading REDD project development and management company with a unique approach to applying innovative market-based solutions to biodiversity conservation and helping local landowners in the developing world monetize their forest and biodiversity assets whether they are governments, communities, ownership groups, or private individuals.

In 2011, Wildlife Works' flagship Kasigau Corridor REDD Project in Kenya was the first in the world to achieve validation, verification and issuance of REDD carbon credits under the VCS and CCB standards. The Wildlife Works Kasigau Corridor REDD Project protects over 500,000 acres of forest and brings the benefits of direct carbon financing to more than 100,000 people in the surrounding communities while also securing the entire wildlife migration corridor between Tsavo East and Tsavo West National Parks.

Wildlife Works is actively developing a portfolio of REDD projects with an aim to protect five million hectares of native forest, mitigating 25 million tons of CO2 emissions per year, and creating thousands of sustainable jobs in rural communities.