Announces landmark partnership with USAID to mark the occasion 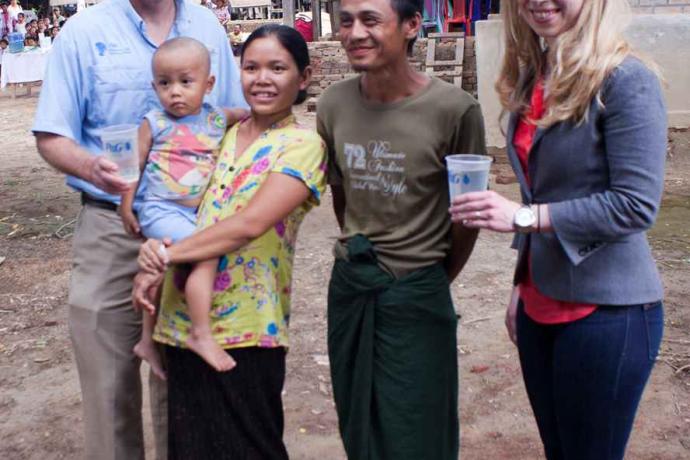 Procter and Gamble (P&G) announced that it has delivered the 6 Billionth liter of clean drinking water as part of its Clinton Global Initiative (CGI) commitment to save one life every hour by the year 2020. The commitment, made in 2010 at the CGI Annual Meeting, entails providing 2 Billion liters of clean drinking water every year, by 2020. To date, clean drinking water provided by P&G has saved an estimated 32,000 lives and prevented 250 Million days of diarrheal illnesses across 71 countries. The 6 Billionth liter was delivered in Myanmar, through a partnership with World Vision, by Dr. Greg Allgood, Founder and Director of P&G Children’s Safe Drinking Water (CSDW) Program, and Chelsea Clinton, Board Member of the Clinton Foundation.

“More than 2,000 children die each day due to diarrheal diseases caused by unsafe water. P&G’s CGI commitment to provide clean and safe drinking water to those who otherwise would not have access is a great example of how CGI members are implementing and scaling what works. I applaud the impact P&G is making around the world,” said Chelsea Clinton, who travelled with P&G and World Vision to personally gift the 6 Billionth liter to a family in Gway Tauk Chaung village in Pathein, 200 kilometers west of Yangon. A short video capturing this moment can be found here.

To mark this milestone occasion and underline its commitment to Myanmar, P&G also announced a multi-year multi-program alliance with USAID, which will focus on improving maternal and child health in the country and will include a provision of at least an additional 200 Million liters of clean drinking water in Myanmar alone, over the next 2 years. Expressing his support to this partnership, US Ambassador to Myanmar, Derek J Mitchell, said “It is wonderful to see the public and private sector reaffirming their commitment to end preventable deaths of children and to launch a sustained effort to save children’s lives.”

Chris Milligan, Mission Director for USAID Burma, recognized that this partnership is an important step forward to supporting the country’s overall development and prosperity. “USAID is pleased to be partnering with P&G to help mothers, newborns and children survive and thrive. This partnership builds upon the longstanding commitment of the United States to improving the lives of the people of this country. Through partnerships such as this one, we are bringing the resources, expertise, and innovation of U.S. professional associations, universities, and the private sector to address Myanmar’s development needs.”

P&G has been providing clean drinking water in developing countries for nearly a decade through its award-winning P&G Purifier of Water technology. The powdered water purification product is a simple and effective way to make clean drinking water for the entire family, as the sachets turns dirty, potentially deadly water into clean and drinkable water very quickly. Each sachet of P&G Purifier of Water contains 4 grams of powder that can clean up to 10 litres of water. It removes more than 99.99999% of common waterborne bacteria (including those that cause cholera), 99.99% of common waterborne viruses (including those that cause Hepatitis A), and 99.9% of protozoa from contaminated water, helping to reduce diarrheal disease incidence in the developing world by up to 90%. In November, 2012, The Economist magazine recognized it as one of the world’s most impactful innovations.

P&G Purifier of Water has been particularly effective in Myanmar, which is prone to natural disasters including floods, cyclones, droughts, and earthquakes. In 2008, in the aftermath of Cyclone Nargis, Myanmar experienced a severe shortage of clean drinking water. Working closely with World Vision, P&G responded to the crisis by providing over 31 Million litres of clean drinking water to disaster victims across Myanmar over the next three years. Since 2011, P&G and World Vision Myanmar have already distributed over a million sachets, providing millions of litres of clean drinking water to families affected by floods in Tharbaung (September, 2012), Kawthaung (June, 2012), Loikaw (September 2011) and Hpaan (July, 2011), to communities affected by droughts in Dawei, Laung Lon, and Thayetchaung (April, 2012).

Dr. Greg Allgood, Founder and Director of P&G CSDW Program said: "The 6 Billionth Liter marks an important milestone in P&G’s journey towards saving one life every hour, a commitment we made in 2010 at the Clinton Global Initiative Annual Meeting. Sharing the 6 billionth liter of clean drinking water in Myanmar recognizes our longstanding support to the country since Cyclone Nargis, and P&G’s commitment to the future of Myanmar. The multi-year multi-program partnership with USAID that we are announcing today is a reflection of our broader commitment to the development of a healthier and prosperous Myanmar in the years to come."

U Win Zin Oo, Humanitarian and Emergency Affairs Director for World Vision Myanmar said: "Safe drinking water is extremely crucial in saving lives and reducing suffering in relief as well as recovery phases.. The P&G Purifier of Water sachets are a life-saver because they are small, portable and simple to administer through our field staff, allowing us to quickly help as many disaster victims as possible and stem an impending public health crisis. We are grateful to have P&G's support, as together we reduce the vulnerability of people affected by disasters in Myanmar."

About Procter & Gamble and Children’s Safe Drinking Water Program
The P&G Children's Safe Drinking Water Program (CSDW) is a non-profit initiative sponsored by Procter & Gamble, the world’s largest consumer good company and manufacturer of global, iconic and trusted brands like Vicks, Pantene, Gillette, Tide, Duracell, Oral B, Whisper, Head & Shoulders, Olay and SK-II among several others. The CSDW initiative has provided 6 billion litres of clean drinking water to people in need since 2004. CSDW has partnered with a diverse network of over 120 organizations to help distribute water purification sachets in developing countries. In 2012, the CSDW initiative won the US Secretary of State’s Award for Corporate Excellence. To learn more about the P&G CSDW Program, and see how the water purification sachets work, please visit www.csdw.org.

About World Vision Myanmar
World Vision has been working in Myanmar since 1991, with current operations in 11 of the 14 states/regions. World Vision's programs span a range of sectors including education, health, agriculture, and child protection. A microfinance program has been operating since 1998. World Vision's 880 staff and 3,500 volunteers work at the community level to build capacity across a range of technical areas. In 2012, World Vision's work has reached over 1.98 million people in Myanmar. For further information about World Vision’s work globally, please contact Johnny Cruz, director of media engagement, at jcruz@worldvision.org.

About Clinton Global Initiative
Established in 2005 by President Bill Clinton, the Clinton Global Initiative (CGI), an initiative of the Clinton Foundation, convenes global leaders to create and implement innovative solutions to the world’s most pressing challenges. CGI Annual Meetings have brought together more than 150 heads of state, 20 Nobel Prize laureates, and hundreds of leading CEOs, heads of foundations and NGOs, major philanthropists, and members of the media. To date CGI members have made more than 2,300 commitments, which are already improving the lives of more than 400 million people in over 180 countries. When fully funded and implemented, these commitments will be valued at $73.5 billion.

CGI also convenes CGI America, a meeting focused on collaborative solutions to economic recovery in the United States, and CGI University (CGI U), which brings together undergraduate and graduate students to address pressing challenges in their community or around the world, and, this year, CGI Latin America, which will bring together Latin American leaders to identify, harness, and strengthen ways to improve the livelihoods of people in Latin America and around the world. For more information, visit clintonglobalinitiative.org and follow us on Twitter @ClintonGlobal and Facebook at facebook.com/clintonglobalinitiative.

About U.S. Agency for International Development
USAID has been providing humanitarian assistance to Burma since 2000. In 2008, our efforts scaled up in response to the devastation of Cyclone Nargis. From 2008 to 2012, the United States has provided a total of $196 million in bilateral foreign assistance funding to support humanitarian needs, promote democracy, and human rights through projects focused on civil society capacity building, health, education, and humanitarian assistance along the Thai-Burma border, in the Irrawaddy delta, and in central Burma.