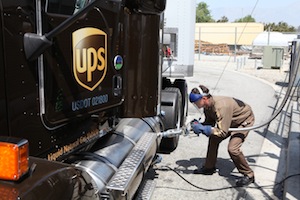 UPS (NYSE:UPS) today announced the accelerated growth of its alternative vehicle fleet with plans to purchase approximately 700 liquefied natural gas (LNG) vehicles and to build four refueling stations by the end of 2014. Once completed, the LNG private fleet will be one of the most extensive in the U.S.

“LNG will be a viable alternative transportation fuel for UPS in the next decade as a bridge between traditional fossil fuels and emerging renewable alternative fuels and technologies that are not quite ready for broad-based long-term commercial deployment,” said Scott Davis, UPS Chairman and CEO.

UPS has been operating natural gas vehicles for more than a decade. With natural gas prices 30-40 percent lower than imported diesel and U.S. production gearing up, the logistics company is investing more aggressively in the natural gas infrastructure necessary to make it part of the UPS delivery network here. Beyond favorable fuel cost and domestic resource access, the industry cites 25 percent less CO2 emissions.

An initial investment of more than $18 million to build fueling stations will be supported by the purchase of these 700 LNG tractors and continued expansion of the natural gas fleet in the U.S. UPS already operates 112 LNG tractor trailers from fueling stations in Las Vegas, Nev., Phoenix, Ariz., and Beaver and Salt Lake City, Utah, and has its own LNG fueling station on its property in Ontario, Calif.

“Public-private partnerships and legislative action can remove disincentives from fuel taxes on natural gas as well as offset the higher incremental costs of the vehicles to create the favorable conditions for companies like UPS and others to broaden deployment,” Davis added.

“When other shipping and logistics companies are talking about possibilities, we are putting alternative fueled vehicles on the highway,” said Davis. “LNG is a good alternative to petroleum-based fuel for long-haul delivery fleets as it is abundant and produces reduced emissions at less cost. At UPS, we are helping to knock down some of the biggest hurdles to broad market acceptance of LNG in commercial transportation by continuing to establish vehicle demand, fuel and maintenance infrastructures.

“We plan expansion through infrastructure partnerships and a broader fleet in states that are leading the way to make alternative fuel vehicles economically feasible,” Davis said.

For more information on UPS's sustainability initiatives, review the company's 2011 Corporate Sustainability Report at responsibility.ups.com/Sustainability with the new 2012 report coming this summer.

UPS (NYSE:UPS) is a global leader in logistics, offering a broad range of solutions including the transportation of packages and freight; the facilitation of international trade, and the deployment of advanced technology to more efficiently manage the world of business. Headquartered in Atlanta, UPS serves more than 220 countries and territories worldwide. The company can be found on the Web at UPS.com and its corporate blog can be found at blog.ups.com. To get UPS news direct, visit pressroom.ups.com/RSS.

UPS is a global leader in logistics, offering a broad range of solutions including transporting packages and freight; facilitating international trade, and deploying advanced technology to more efficiently manage the world of business. Headquartered in Atlanta, UPS serves 10.6 million customers daily in more than 220 countries and territories worldwide.