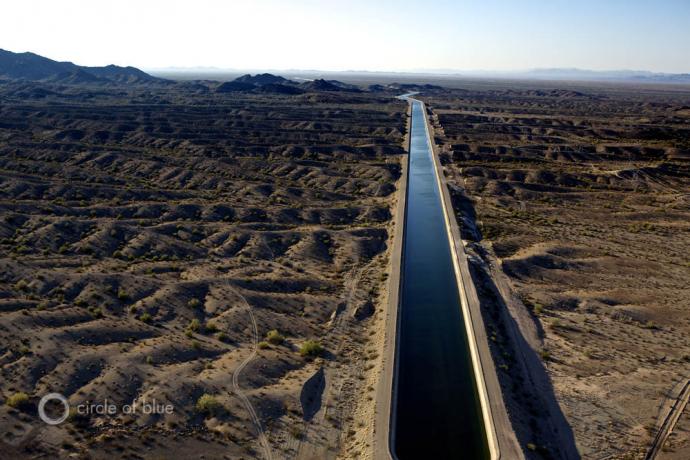 The Central Arizona Project canal moves water from the Colorado River to Tucson and Phoenix.

Circle of Blue, a team of award-winning journalists and researchers reporting on water and other worldwide resource issues, and the Institute for Globally Transformative Technologies (LIGTT) at Lawrence Berkeley National Laboratory, a pioneer in bringing scientific solutions to critical global problems, have partnered to create Choke Point: Index, the first dynamic, open-source data and on-the-ground journalism project exploring the globally significant competition between water, food, and energy.

The world’s demand for fresh water is growing so fast that, by 2030, scarcity could trigger food shortages, cripple energy production, upend economic development, and weaken political stability. A water supply crisis — in likelihood and impact — is one of the world’s top risks, according to the World Economic Forum Global Risks Report 2013.

“Considering the severe local and catastrophic scenarios, we still have very little on which to base some of the most important decisions of our era,” said J. Carl Ganter, managing director of Circle of Blue and vice chairman of the World Economic Forum Global Agenda Council on Water Security.

Choke Point: Index will help leaders in business, policy, and development, as well as researchers and the public, to make faster, fact-based, strategic decisions. The project combines award-winning journalism with unprecedented collections of new and historically relevant data. By illustrating the cross-cutting context of water with food and energy, Choke Point: Index puts a face on complicated issues that affect every nation’s economy, environment, and security.

This summer, Choke Point: Index focuses on the nexus of water, food and energy in the United States and Canada. The United States faces ongoing drought that, as it did in 2012, is likely to force power plant closures, cause crop failures, and threaten water-borne transport. In Canada, a thirsty energy sector seeks new water-monitoring capabilities and climate change requires rethinking assumptions of water abundance. The North American phase of Choke Point: Index will develop analytical models and dashboards to help spot real-time trends in these two countries, and the new technologies and processes that result can then be applied in India and other parts of the world.

"Solutions – and policy decisions — at the scale and speed that the world needs require the ability to understand the impact and immediacy of constantly changing global resource challenges, particularly water quality and scarcity," said Shashi Buluswar, executive director of LIGTT. "In order to respond effectively, we need to understand the complexities, the connections, and what's happening on the front lines. Choke Point: Index taps into the exciting new era of data exploration. Solutions and nimble innovations around the world are born from the data and stories, from the smallest communities to the largest urban centers."

Based on methodology developed by Circle of Blue and recognized by the Rockefeller Foundation in 2012, Choke Point: Index will combine:

Huge amounts of information exist, from satellite imaging to real-time river flows and on-the-ground stories of success and failure. However, the mountains of historical and streaming data are largely inaccessible, stored separately across public, private, and academic institutions around the world. Likewise, many are published online, but in formats that are difficult to use or not connected.

"Awareness has grown and many solutions are within reach," Ganter said. "Yet, we need information from the field, we need it faster, we need to share it more quickly, and we need to listen more closely to diverse voices. We have reached a rare moment in history when the need for more and better data has never been greater; when the tools to network, collaborate, and coordinate have never been better."

Among the principle data gathering and visualization tools, Choke Point: Index will use the latest technologies from Google, particularly Fusion Tables in Google Drive, to bring together and visualize large data sets that can be shared openly. Circle of Blue was among the first users of Fusion Tables.

Choke Point: Index is developed in sync with Global Choke Point, a comprehensive international reporting and convening program that explores the ramifications of resource scarcity around the world, produced by Circle of Blue and the Washington-based Wilson Center. Initial collaborators include the Wilson Center, GlobeScan, Qlikview, University of Alberta Water Initiative, and Visualizing.org, among others.

Circle of Blue brings the strength of trusted journalism by using its teams of leading journalists, photographers, data experts, field researchers, and designers who report from the front lines of the world’s resource crises, with a core focus on water. In 2012, Circle of Blue received the Rockefeller Foundation’s Centennial Innovation Award for its breakthrough, feedback-loop model that combines on-the-ground reporting, data collection, analysis, design, and convening. Circle of Blue’s reportage is referenced widely. Circle of Blue, based in Traverse City, Mich., is a nonprofit affiliate of the Pacific Institute. For more information, please visit: www.circleofblue.org or follow Circle of Blue on Twitter: @circleofblue.

LIGTT, the Institute for Globally Transformative Technologies at Berkeley Lab, was created by a White House initiative in 2012 to bring scientific advances for the developing world. LIGTT utilizes the collective expertise of Berkeley Lab’s 3,000 scientists and engineers to identify, design, develop, and deploy technological breakthroughs for a range of global problems, including health, agricultural development, poverty alleviation and resource scarcity. In this project, LIGTT/Berkeley Lab scientists will develop the powerful scientific models to project the water threat under various scenarios, the implied threat to food and energy, as well as what types of changes are likely to make the largest difference in the developing world.

About Circle of Blue video

Become a fan of Circle of Blue on Facebook www.facebook.com/circleofblue