Thousands Expected to Celebrate at One of the Nation's Largest Annual Parades Honoring Dr. King 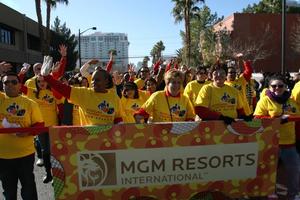 Hailed as one of the nation's most popular annual parades celebrating the ideals and life of Dr. King, thousands are expected to line the Fourth Street parade route to commemorate Dr. King's legacy of promoting equal and human rights. The theme for this year’s parade is “Living the Dream: Dream with a Vision; Live with a Purpose.”

“MGM Resorts shares Dr. King’s dream of a world where every American, and every human being, has equal rights to pursue life, liberty and happiness. We are a company that is fully committed to the principles of diversity, community engagement and creating sustainable communities in every way. We proudly join our communities in honoring Dr. King’s historic legacy and the ideals that he stood so boldly for,” said Jim Murren, Chairman and CEO of MGM Resorts International.

This is the third straight year MGM Resorts has served as the parade’s presenting sponsor. The Company has supported the Dr. Martin Luther King Jr. Parade since 2003.

Wendell Williams, Chair of the nonprofit Dr. Martin Luther King Jr. Committee, expects this year's event to be one of the most diverse ever, with 140 entries anticipated, including floats, marching bands, dancers, and motorcades featuring both cars and motorcycles. Public officials and representatives of area nonprofit organizations are also expected to participate in the event. Commissioner Chris Giunchigliani and Southern Nevada Regional Planning Coalition's Tyrone Thompson will join MGM Resorts' Kenyatta Lewis, Executive Director of Supplier Diversity, in serving as parade judges.

“The 31st Annual Dr. King Birthday Parade is a reminder that the King Holiday is a ‘day on’ as opposed to a day off. It's a time of peace and service,” said Williams.

More than 100 employee volunteers from MGM Resorts are expected to turn out in full force to march in the parade with an MGM Resorts float created by the Company’s Events department.

MGM Resorts International (NYSE: MGM) is one of the world's leading global hospitality companies, operating destination resort brands including Bellagio, MGM Grand, Mandalay Bay and The Mirage. The Company also owns 51% of MGM China Holdings Limited, which owns the MGM Macau resort and casino and is in the process of developing a gaming resort in Cotai, and 50% of CityCenter in Las Vegas, which features ARIA resort and casino. For more information about MGM Resorts International, visit the Company's website at www.mgmresorts.com.