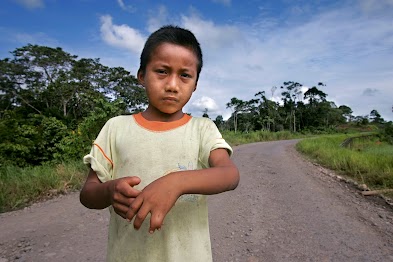 Steven Donziger, a sole practitioner in New York, filed claims against Chevron in federal court charging the oil giant with orchestrating an illegal campaign of intimidation and lies to evade paying a $19 billion court judgment for creating what experts believe is the world's worst oil-related environmental disaster.

The Donziger lawsuit is available here.  A blog from The Chevron Pit explaining the development is below and also can be read here.

Chevron: can you handle the truth about your crimes in Ecuador?

New York lawyer Steven Donziger is going after Chevron, its CEO John Watson, and its General Counsel R. Hewitt Pate for orchestrating a campaign by the oil giant to evade paying a $19 billion judgment in Ecuador by targeting and defaming Donziger and other members of the legal team. Donziger, a litigator who has dedicated most of his professional work to the field of human rights advocacy, battled for almost two decades to help indigenous and farmer groups in Ecuador’s rainforest hold Chevron accountable for the deliberate dumping of billions of gallons of toxic waste onto their ancestral lands, leading to the decimation of traditional cultures and an outbreak of cancer that has killed or threatens to kill thousands of people.  See this article in Courthousenews.com.

(For background on Chevron's human rights violations in Ecuador and fraudulent cover-up, see this devastating video. For a written summary of the overwhelming evidence against Chevron relied on by the Ecuador court in finding the company guilty, see here.)

Donziger, represented by John Keker of San Francisco’s Keker & Van Nest, quietly filed a 158-page compendium of claims against the oil giant last week in New York federal court.  The lawsuit can be read here starting on p. 92.  Donziger, who lives in a small apartment in New York City with his wife and son, had previously been sued (along with his clients) for $57 billion by Chevron as part of an outrageous and trumped-up civil racketeering claim.  Chevron claimed that the entire Ecuador case – which includes 64,000 chemical sampling results proving toxic contamination at the company’s hundreds of well sites in the Amazon -- was an attempt by Donziger and his clients to extort money from the company.

Donziger said that the racketeering case was a thinly-veiled attempt by Chevron and its high-billing law firm, Gibson Dunn & Crutcher, to cover up evidence of Chevron’s crimes and to intimidate the plaintiffs into abandoning the 19-year-old environmental case, which was filed in New York in 1993 but was shifted to Ecuador at Chevron's request after the oil giant filed numerous affidavits praising the country’s court system.  In February 2011, Donziger and his clients won the judgment after an eight-year trial in Ecuador marred by Chevron’s attempts to intimidate judges, offer bribes to Ecuador's government, fabricate scientific evidence, and sabotage the proceedings by filing dozens of frivolous motions and drowning the court in paper.  See here.

Chevron's legal team at Gibson Dunn openly markets a “template” to corporate defendants like Chevron facing large liabilities for environmental and human rights abuses.  The template, which the firm calls a “rescue operation” for clients in trouble, assumes that the wholesale intimidation of lawyers will allow clients to win via subterfuge what they can’t win on the merits. The Gibson Dunn “rescue” team – led by New York attorney Randy Mastro, Ted Boutrous, Andrea Neumann, Scott Edelman, and William Thomson – has used over 60 lawyers and billed Chevron hundreds of millions of dollars.  All their hard work has brought a fair amount of disrepute to their law firm as Chevron has suffered multiple courtroom setbacks around the world, dramatically increasing its liability and creating a shareholder rebellion against CEO Watson.  See here.

Mark our words – it is just a matter of time before Gibson Dunn itself gets sued for creating evidence and engaging in intimidation tactics to justify its high-priced fraud “template” that it sells to clients.

In 2009, the same Gibson Dunn “rescue” team leveled fabricated fraud charges in California against another American attorney who once worked with Donziger on the Ecuador case, and it blew up in their collective faces.  That attorney, Cristobal Bonifaz, won a judgment against Chevron after a court found the company tried to use the fraud lawsuit to suppress his First Amendment rights and harass him, violating California’s anti-SLAPP statute. Chevron was ordered to pay a large fine in that case and separately has been sanctioned by federal courts and accused of multiple ethical violations for doing Chevron’s dirty work.  See here and here.

Any lawyer who cares about fairness should read the chilling facts documented in Donziger’s lawsuit.  It is indisputable that he has been the target of an unrelenting campaign of defamation, harassment, and intimidation because he dared to stand up to the goons at Chevron who are trying to hide the company’s outrageous misconduct in Ecuador. For this, he probably has suffered a level of harassment unprecedented in the annals of American jurisprudence.

The harassment included 15 days of sworn deposition testimony where he faced off against up to 20 Chevron lawyers and staffers, overseen by a federal judge (the normally well-regarded Lewis A. Kaplan) who bought into Chevron’s hysteria and rushed to judgment and in the process sparked a worldwide reaction in the legal community to his excesses. See here and here. See petition asking for Kaplan’s dismissal here.

Donziger also faced 24/7 surveillance in Manhattan and Ecuador and a campaign of defamation by Chevron’s press flaks and lawyers that is outlined in the legal document he filed in court.

Donziger’s lawsuit lays out the gory facts of Chevron's criminality and corruption in Ecuador, dating back to the mid-1990s when it engaged in a sham remediation to try to weasel out of the original lawsuit.

The Donziger suit explains that once Chevron realized it would lose the Ecuador trial based on the scientific evidence, the company turned to Gibson Dunn to try to render the Amazonian communities defenseless.

New York judge Kaplan -- who from the bench has made insulting comments about the indigenous groups victimized by Chevron -- will now have to decide whether to let Donziger's claims go forward as part of the existing Chevron racketeering case. Chevron steered its original case to Kaplan knowing full well his feelings toward Donziger, a fellow Harvard Law School graduate who he seems to treat as some sort of wayward son. At one early hearing, Kaplan – who has a corporate law background -- sneered that "Mr. Donziger is trying to become the next big thing in fixing the balance of payments deficit" between the U.S. and the rest of the world by going after U.S. companies, which he lamented as "a sad pass" and "a giant game." See here.  Kaplan on numerous occasions described the Ecuadorian indigenous groups as “the so-called” plaintiffs, as if he was trying to deny their very existence.

Kaplan, who once tried to impose an illegal worldwide injunction blocking enforcement of the Ecuador judgment, already has been reversed by the federal court of appeals on the case; whether he lets Donziger's counterclaims move forward so the full truth about Chevron’s misconduct can come out in his courtroom will be interesting to watch given his obvious biases, to say the least.

Here is a quick summary of Donziger's counterclaims against Chevron:

Let's see if Chevron and its high-flying CEO Watson and General Counsel Pate -- who recently received a 75% pay raise for his work on the Ecuador case after losing the largest environmental judgment in history -- have the guts to let a jury hear all the evidence of the company’s corrupt activities in Ecuador coordinated from company headquarters in San Ramon, California.

We predict that like most bullies, Watson and Pate will cower in fear and order their “rescue team” at Gibson Dunn to do all they can to convince Judge Kaplan to keep the truth contained in Donziger’s counterclaims from coming to light.

Become a follower of The Chevron Pit.

Visit and watch a video on ChevronToxico.com to find out more.

The Amazon Defense Coalition is a part of a regional, national and global struggle for environmental and collective rights in the Ecuadorian Amazon