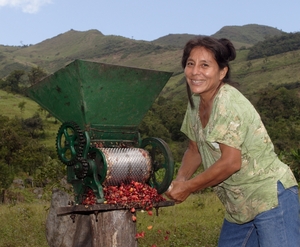 Equal Exchange is the Massachusetts-headquartered business that introduced Fair Trade coffee to American grocery stores and coffee shops in the 1980s and 90s and who today remains the largest North American enterprise dedicated exclusively to buying and selling Fair Trade products. GMCR, based in Waterbury, VT, was itself an ‘early adopter’ and has been offering Fair Trade coffee for 14 years. To their considerable credit GMCR recently became the world’s largest purveyor of Fair Trade Certified™ coffee, handling more than 26,000,000 pounds of Fair Trade coffee annually. They have also donated generously to support various economic development efforts in coffee growing communities.

However, while acknowledging these accomplishments, in today’s ad Equal Exchange challenges GMCR to “open your eyes…to the controversy raging…” and “leave Fair Trade USA” in light of recent unilateral changes enacted by the agency.

Without input from stakeholders, on January 1, FTUSA abandoned the global Fair Trade system (Fair Trade International, aka FTI) and loosened eligibility rules to allow large coffee, cocoa and sugar plantations to receive Fair Trade certification. That would put these large estates in direct competition with the hundreds of small-farmer co-operatives around the world who co-created the Fair Trade movement and have been the core of Fair Trade for over 25 years. This was a FTUSA proposal that the 20+ other global members of FTI, including the farmer representatives, had overwhelmingly rejected previously. FTUSA also withheld from FTI the dues it owes for 2011, funds that it is now using to compete with FTI in the US certification market.

Equal Exchange, the small-farmer co-operatives, and many other Fair Trade pioneers and advocates believe these and other recent acts by FTUSA gravely undermine the very purpose of Fair Trade and constitute a betrayal of the small-farmer co-ops.  Consequently they also undermine the important social and economic progress that GMCR’s support of Fair Trade and small farmers has to date made possible.  The open letter goes on to state,

“Fair Trade, a product of years of sweat, sacrifice and risk, belongs to the farmers. But Fair Trade USA has abandoned the legitimate system, not paid its dues, and changed the rules...” Rink Dickinson & Rob Everts, co-presidents, Equal Exchange

In different forums Equal Exchange has been challenging the path taken by FTUSA, including a recent private meeting with Larry Blanford and others at GMCR. Because of GMCR’s large volume of Fair Trade sales, and the licensing fees it pays for use of the FTUSA seal, it is the largest single source of revenue for FTUSA and a critical pillar of support. Those funds, and the benefits of being associated with the popular GMCR brand, are aiding FTUSA’s efforts even as it pursues a course apart from the rest of the global Fair Trade movement. Therefore Equal Exchange is using this ad, and a subsequent ad that will run on Thursday, May 24th, to publicly encourage GMCR to end its relationship with FTUSA and rejoin the global system of certifiers that FTUSA recently left.

Equal Exchange, founded in 1986, is the worker-owned and governed co-operative who pioneered the Fair Trade concept in the U.S. coffee industry. They have since successfully expanded their Fair Trade program into the tea, cocoa, chocolate, sugar and healthy snack categories. Equa...