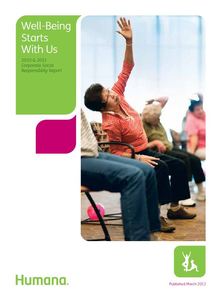 “This report marks an important milestone in our CSR journey,” said Humana Chairman and CEO Mike McCallister. “Through this report, we share our efforts and aspirations to further integrate CSR into our business strategy and operations across the U.S.”

The GRI is a network-based organization that pioneered the world’s most widely used sustainability reporting framework. Humana self-declared its report to comply with GRI’s Level C criteria, in which it reports on all profile disclosures and 10 performance indicators.

View a condensed version of the report.

Humana Inc., headquartered in Louisville, Kentucky, is a leading health care company that offers a wide range of insurance products and health and wellness services that incorporate an integrated approach to lifelong well-being. By leveraging the strengths of its core businesses, Humana believes it can better explore opportunities for existing and emerging adjacencies in health care that can further enhance wellness opportunities for the millions of people across the nation with whom the company has relationships.

More information regarding Humana is available to investors via the Investor Relations page of the company’s web site at www.humana.com, including copies of:

Humana Inc. is committed to helping our millions of medical and specialty members achieve their best health. Our successful history in care delivery and health plan administration is helping us create a new kind of integrated care with the power to improve health and well-being and lower costs...