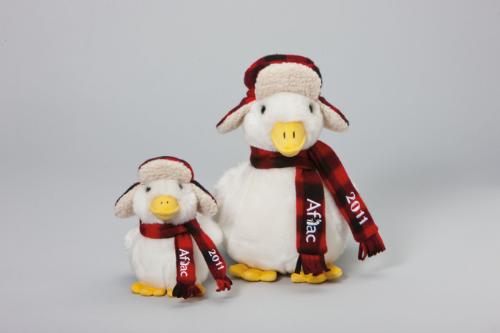 The annual Aflac Holiday Duck, available at more than 670 Macy's or at Aflacholidayduck.com, has helped Aflac raise more than $67 million for childhood cancer. (PRNewsFoto/Aflac)

/PRNewswire/ - Aflac, the number one provider of supplemental insurance in the United States, is teaming with Macy's to sell the 2011 plush Aflac Holiday Duck, with proceeds going to support research and treatment for childhood cancer. In its eleventh year, the Aflac Holiday Duck program has already helped raise nearly $3 million to fight the disease that affects more than 12,000 children under the age of 19 who are diagnosed each year in the United States, according to the American Childhood Cancer Organization.

"Aflac and our 70,000 independent agents have a long history of giving back to the community," Aflac Senior Vice President and Chief Marketing Officer Michael Zuna said. "So we are proud to lend our company's most visible image as a leading advocate for families facing childhood cancer."

The unique 2011 Aflac Holiday Duck is dressed in a warm scarf and matching hat with ear flaps, evoking frosty images of winter. This year Macy's has expanded its commitment to the fight against childhood cancer by selling the Aflac Holiday Duck nationally at more than 670 Macy's stores, up from 211 stores in 2010.

"We are extremely pleased to expand our long-standing relationship with Aflac and bring their iconic plush duck to more than 670 Macy's locations nationwide this holiday season," said Amy Kule, Macy's group vice president of National Events and Partnership Marketing. "Macy's mission is to make a difference in the many local communities we serve. With every sale of the Aflac Holiday Duck, we will collectively impact for the better, countless lives of children and families battling childhood cancer."

When a policyholder gets sick or hurt, Aflac pays cash benefits fast. For more than 55 years, Aflac insurance policies have helped provide a safety net and given policyholders the opportunity to focus on recovery, not financial stress. In the United States, Aflac is the number one provider of guaranteed-renewable insurance. In Japan, Aflac is the number one life insurance company in terms of individual policies in force. Aflac insurance products provide protection to more than 50 million people worldwide. For five consecutive years, Aflac has been recognized by Ethisphere magazine as one of the World's Most Ethical Companies and by Forbes magazine as one of America's Best-Managed Companies in the Insurance category. In 2011, Fortune magazine recognized Aflac as one of the 100 Best Companies to Work For in America for the 13th consecutive year. Also, Fortune magazine included Aflac on its list of Most Admired Companies for the 10th time in 2011. Aflac Incorporated is a Fortune 500 company listed on the New York Stock Exchange under the symbol AFL. To find out more about Aflac, visit aflac.com or aflacenespanol.com.

Macy's, the largest retail brand of Macy's, Inc., delivers fashion and affordable luxury to customers at more than 800 locations in 45 states, the District of Columbia, Puerto Rico and Guam. Macy's stores and macys.com offer distinctive assortments, including the most desired family of exclusive and fashion brands for him, her and home. Macy's is known for such epic events as Macy's 4th of July Fireworks® and the Macy's Thanksgiving Day Parade®, as well as spectacular fashion shows, culinary events, flower shows and celebrity appearances. Building on a 150-year tradition, Macy's helps strengthen communities by supporting local and national charities that make a difference in the lives of our customers. For Macy's media materials, images and contacts, please visit our online pressroom at www.macys.com/pressroom.