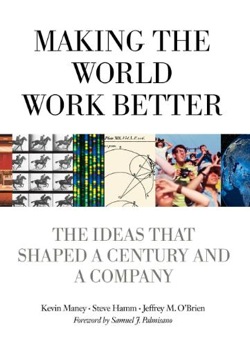 /PRNewswire/ - IBM (NYSE: IBM) will mark its Centennial with the release of a new business book, Making the World Work Better: The Ideas That Shaped a Century and a Company (IBM Press/Pearson; paperback original; June 16, 2011). The book is written by award-winning journalists, Kevin Maney, Steve Hamm and Jeffrey M. O'Brien.

The book chronicles the ways the world has changed over a century in technology, business and the way progress happens, as well as the role IBM has played in these changes.

The lessons of the book for all businesses are powerful: To survive and succeed for a decade - even more for a century - requires the ability to anticipate change and the capacity to continually transform. Over the course of a century, IBM - grounded in a distinctive culture and set of core values - came into being, grew, thrived, nearly died, transformed itself, and is now charting a new path for its second century of innovation.

"The authors uncovered not only a wealth of facts and stories, but a set of powerful ideas. Though never written down, they have informed the company's history from its birth to the present day," said Mike Wing, Vice President of IBM Strategic Communications and editor of the book.

IBM Chairman, President and Chief Executive Officer Sam Palmisano contributed the book's foreword. He notes that the decision to go beyond a traditional commemorative publication - to research and produce a book of ideas - was based on the belief that the company's history contains lessons about business, technology and progress that go far beyond IBM.

Founded in 1911, IBM was shaped by Thomas J. Watson Sr., whose slogan "Think" still guides the company today. Since Watson's day, IBM's breakthroughs and inventions have formed the DNA of the information technology industry. At the same time, IBM also pioneered many dimensions of 20th century business, and enabled many essential systems of the modern world.

The book is both a look at IBM's past and an instructive narrative on how one of the world's largest companies will operate in the 21st century. It is divided into three chapters:

The book will be printed in eight languages and be available in an electronic format as an eBook.

Kevin Maney is the author of three critically acclaimed books. He was a reporter, editor and columnist at USA Today for 22 years and a contributing editor at Conde Nast Portfolio. He has also been a contributor to Fortune, Wired, The Atlantic, NPR and ABC News.

Steve Hamm is a writer and videographer in IBM's corporate communications department. Previously, he was a journalist for 30 years, most recently at BusinessWeek, where he was a senior writer in the technology section. As a journalist, he covered the computer industry for 20 years, first in Silicon Valley and then in New York.

About IBM: For more information on the IBM Centennial, visit: www.ibm100.com.

Editors: Visit IBM's Centennial press room to obtain historical images, a snapshot of milestones and a fact sheet at www.ibm.com/press/ibm100.

Participate in the social conversation about IBM's Centennial by including #IBM100 in a tweet.