H.R.H. Maxima of the Netherlands to kick-off fourth Social Capital Markets conference on impact investing between May 30 - June 1, 2011 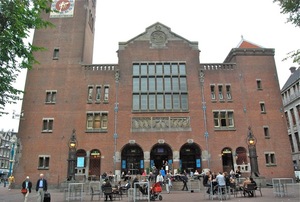 AMSTERDAM, May 30 /CSRwire/ - Over 600 attendees will represent 50+ countries at the intersection of money and meaning at the SOCAP/Europe international conference, which commences in Amsterdam at 18:30 (17:30 GMT) today. To be held at the Beurs van Berlage -- the first stock exchange in the world -- between May 30 and June 1, SOCAP/Europe will have an impressive line-up of speakers from around the world.

Her speech will be followed by a Plenary Panel discussion entitled "This Moment in Europe, This Moment in the World," in which European leaders in inclusive finance examine the rising populist demand for financial practices and services that provide not only financial return but also environmental and social return. Amongst the plenary speakers are Ms. Marilou van Golstein Brouwers, Managing Director at Triodos Investment Management (The Netherlands) and Mr. Klaus Tischhauser, founder and Managing Director, responsAbility Social Investments (Switzerland).

EuroCharity is one of the official Network Partners of SOCAP/Europe, which is being attended by Mr. Peter Michel Heilmann, President.

About impact investing, SOCAP and SOCAP/Europe
Impact investing is a relatively new and fast-growing movement of capital that is aimed towards investing in businesses andefforts that work towards solving global problems - while also generating a financial return. The movement began withmicrofinance but investments in projects in sustainable energy, education, affordable housing, agriculture or access to financialor health services are quickly gaining ground.

The Impact Investing conference is being organised by SOCAP/Europe, a cross-continent partnership between SOCAP Events in the U.S. and Amsterdam's PYMWYMIC (Put Your Money Where Your Mouth Is Community). Frank van Beuningen, founder of PYMWYMIC, started Europe's first impact investing fund in 1997 and has since seeded 30 impact companies.

San Francisco-based SOCAP ("Social Capital") is a multi-platform organisation dedicated to the flow of capital towards social good, connecting leading global innovators -- investors, foundations, institutions and social entrepreneurs -- to build a marketplace at the intersection of money and meaning. After three successful gatherings in San Francisco, SOCAP now comes to Europe for the first time.

A Dutch domiciled educational foundation (Stichting), SOCAP/Europe is a content-rich, community-built event bringing the best of the world's entrepreneurs, practitioners and players in impact investing into one shared space. It has built coalitions amongst more than 100 organisations and raised the money to scholarship 50 global social entrepreneurs, among many other recent achievements.

SOCAP/Europe is the conference where money meets meaning; where investors gather to collaborate and learn from others who are finding a way to invest their money for financial return as well as for the benefit of people and the planet; where entrepreneurs come to find out who has made a breakthrough and who their next partner or next investor could be.

SOCAP is coming to Europe for one simple reason: it is time. Progressive impact-driven investors, entrepreneurs, and multi-generational families are now ready to meet at the intersection of money and meaning.

The fourth Social Capital Markets conference is being held in Europe in order to highlight the long-time players in this space that is a mix of an asset class and a movement. SOCAP/Europe wants to introduce the new young, outsiders to their potential collaborators and those who can help them reach their goals faster and smarter.

Call it blended value, call it philanthrocapitalism, call it social investing. Whatever one calls it, it's a wave and it is happening now: people want their money to have meaning. The emergence of the Social Capital Market means that we are moving beyond the myopia of demanding only financial return, without thought for social and environmental impact. Return is now also measured in solutions.

Hundreds of individuals and organisations across Europe and beyond have experience, insight and ideas that they're ready to share in the spirit of building the social capital market together.