Report details company's commitments in the areas of health, community and environment 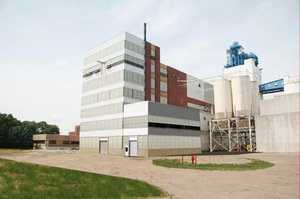 MINNEAPOLIS, Mar. 24 /CSRwire/ - General Mills today announced the availability of its 2011 Corporate Social Responsibility (CSR) report covering the company's progress on health, community and environmental initiatives. The report can be viewed or downloaded on the company's new CSR website, located at csr.GeneralMills.com.

Notable highlights in this year's report include a series of company firsts, including:


"Every day we strive to continue to earn the trust of consumers and our many other stakeholders," said Ken Powell, chairman, chief executive officer, General Mills. "Operating as a socially responsible company is an essential part of that. Our CSR highlights some of the ways General Mills is leading and contributing as a corporate citizen - so that everyone can see."

This report, now in its 41st year, covers three focus areas: health, communities and environment. Highlights of each section follow.

General Mills made record-setting gains in improving the health profile of its products in fiscal 2010. Nearly 60 percent of General Mills' U.S. Retail sales are now comprised of products that have been nutritionally improved since 2005. The nutritional profiles of more than 500 different General Mills products have now been improved by adding whole grains, fiber and calcium, and reducing calories, sugar, sodium and trans fat.

In 2010, General Mills also pledged to reduce sodium by 20 percent, on average, in more than 400 of its products by 2015. Already last year, the company reduced sodium by 10 percent or more in 50 flavors of Progresso soups, several of its Big G and Cascadian Farm cereals and Chex Mix Trail Mix.

As part of its commitment to communities, General Mills contributed more than $100 million to charitable causes in fiscal 2010 through its brand philanthropy and corporate contributions, General Mills Foundation grants, and product donations - a 10 percent increase from the previous year.

In 2010, General Mills expanded its giving around the globe - increasing international contributions by nearly 50 percent from last year. Two of the company's flagship international philanthropic activities are focused on Africa. Join My Village is an online partnership with CARE to help women and girls fight poverty in Malawi, Africa. Partners in Food Solutions links the technical and business expertise of volunteer scientists, engineers, and others at General Mills to small- and medium-sized mills and food processors in Africa. During the past two years, more than 300 company researchers and scientists have volunteered more than 20,000 hours to help solve technical issues at several African food-processing plants. This month, General Mills announced two new corporate partners, Cargill and DSM, to help broaden the scope and scale of Partners in Food Solutions.

General Mills has established its first-ever goal to reduce the environmental footprint of the company's packaging. By 2015, the company aims to sell 40 percent of its global product volume in packaging that has been improved through modifications to packaging weight, recycled content, renewable content or truck loading efficiency made over the previous five years. General Mills already sets environmental sustainability goals for energy usage, greenhouse gas emissions, water usage and solid waste generation. In 2010, the company announced new, expanded sustainability goals in these four areas and also established a new North American transportation goal to reduce the fuel used to ship a pound of product by 35 percent by fiscal 2015.

As a committed steward of the environment, General Mills expanded its use of renewable energy in 2010. Oat hulls and solar power are generating energy at select General Mills facilities in the United States. In December 2010, General Mills began using a biomass unit at its Fridley, Minn., facility to burn leftover oat hulls that will provide 90 percent of the steam used to heat the plant and produce oat flour. Solar panels were installed on the rooftop of General Mills' distribution center in Methuen, Mass., last summer to supply 80 percent of the plant's electricity needs in the summer and 40 percent during the rest of the year.

General Mills buildings around the globe were recognized for being "green" in 2010. The company opened the doors on its first LEED-certified buildings - a distribution center in Georgia and an existing office in Minnesota that was upgraded to meet LEED specifications in 2010. All General Mills' European plants earned one of the continent's highest awards in environmental management: "ISO 14001 certification."