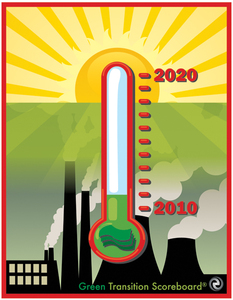 The Green Transition Scoreboard® (GTS) represents time-based, global research of non-government investments and commitments for all facets of green markets. This update of the GTS totals $2,005,048,785,088 from 2007 to the end of 2010, significant because many studies indicate that investing $1 trillion annually until 2020 will accelerate the Green Transition worldwide. This updated 2010 finding puts global investors and countries on track to reach the $10 trillion in investments goal by 2020.

Hazel Henderson, D.Sc.Hon., FRSA, former US government technology advisor and president of Ethical Markets Media said, "this new total is remarkable in spite of economic uncertainty. It indicates that the global transition away from the 300-year fossil-fueled Industrial Era is accelerating toward the cleaner, greener, information-rich economies of the 21st century."

Timothy Nash, M.Sc., Senior Advisor to Ethical Markets Media, adds, "This over $2 trillion total does not include nuclear, 'clean' coal or CCS, nor biofuels from food or agricultural sources, which we consider unsustainable."

Rosalinda Sanquiche, Ethical Markets Media's Executive Director and editor of the Green Transition Scoreboard® report, points out, "this startling amount does not include thousands of deals under $100 million, which we hope to include in future reports. We have added and will continue to track our exclusive Corporate R&D sub-report and invite companies to alert us to any investments we may have missed."

The full report is available at www.greentransitionscoreboard.com.

The Green Transition Scoreboard® has won praise from experts and asset managers including Matthew Kiernan, Nicholas Parker, Ashok Khosla and Don Tapscott, author of bestsellers Wikinomics and Macrowikinomics, who lauds, "Because it enables tracking of the global macro-shift from the Industrial Era to the emerging sustainable economies of the 21st century, the GREEN TRANSITION SCOREBOARD® is an important innovation. Check it out!"

Ethical Markets Media is an independent, multi-media company analyzing and reporting daily news of the global green transition and responsible, ethical investments and companies worldwide (www.ethicalmarkets.com and www.mercadoetico.com.br). As part of its research, it released its latest BEYOND GDP Survey in 12 countries with London- and Toronto-based Globescan on January 21, 2011.