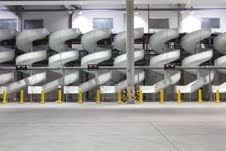 The Cologne hub is the second FedEx Express hub to be solar-powered and the fifth solar facility in operation within FedEx Corp.

The hub in Cologne is one of the most modern FedEx hubs in the world. Its fully-automated sorting system can process up to 18,000 packages and documents per hour. The roof features the largest FedEx Express solar power installation worldwide and represents one of the largest rooftop solar installations in North Rhine-Westphalia, with an area of 16,000 square meters, producing about 800,000 kilowatt hours per year.

Including the Cologne hub, the five on-line FedEx solar facilities will reduce annual carbon dioxide emissions by a projected 3,918 metric tons - the equivalent of more than 440,000 gallons of gasoline never burned or over 100,000 tree seedlings growing for 10 years.*

"This solar-powered facility is the latest example of our commitment to responsibly connect the world for our customers through innovative solutions," said Mitch Jackson, vice president of Environmental Affairs and Sustainability for FedEx Corp.

As a pioneer of the modern hub-and-spoke transportation system for air freight, FedEx Express has built an unsurpassed global network with a highly synchronized system of sorting facilities around the world, allowing it to efficiently process millions of shipments each day and providing customers with access to all major U.S. and international markets.

The Cologne hub is a vital link in this FedEx worldwide network, acting as a central gateway for packages arriving by ground or air from Central and Eastern Europe providing fast connectivity within Europe, to the U.S. or Asia.

It joins the global network of FedEx Express hubs that route shipments to destinations all over the world. Within the U.S., FedEx Express hubs are located at Memphis, Tennessee; Indianapolis, Indiana; Newark, New Jersey; Miami, Florida; Alliance (Dallas-Fort Worth), Texas; Oakland, California and Anchorage, Alaska. In addition to Cologne Bonn, FedEx Express has international hubs in Paris, France and Guangzhou, China.

"The opening of the Cologne hub enhances North Rhine-Westphalia's standing as a world class logistics facility. It offers companies in the region unparalleled growth opportunities as well as the creation of new jobs within the state," said Harry K. Voigtsberger, minister for Economic Affairs, Energy, Construction, Housing, and Transport in of the state of North Rhine-Westphalia.

"Today's announcement couldn't have come at a more exciting time. The Cologne hub will play a pivotal role in FedEx strategy of strengthening and expanding its market position in Europe," said Gerald P. Leary of FedEx. "Our new hub is testament to FedEx belief in the economic potential of the German marketplace and its ability to catalyze growth in Central and Eastern Europe."

Cologne Bonn Airport and FedEx Express, the world's largest express transportation company, jointly invested €140 million in the new hub, which commenced operations in June 2010 after relocating from Frankfurt am Main. The FedEx staff count at the Cologne/Bonn site has grown rapidly from approximately 35 to 450 employees. The new hub enables FedEx to expand its operational capacity in Germany and across Europe, as well as increasing the company’s footprint in Eastern Europe. It also ensures that the company continues to offer its customers a seamless and reliable service.

About FedEx Express
FedEx Express is the world's largest express transportation company, providing fast and reliable delivery to more than 220 countries and territories worldwide. FedEx Express uses a global air-and-ground network to speed delivery of time-sensitive shipments, by a definite time and date with a money-back guarantee.

About FedEx Corp.
FedEx Corp. (NYSE: FDX) provides customers and businesses worldwide with a broad portfolio of transportation, e-commerce and business services. With annual revenues of $36 billion, the company offers integrated business applications through operating companies competing collectively and managed collaboratively, under the respected FedEx brand. Consistently ranked among the world's most admired and trusted employers, FedEx inspires its more than 285,000 team members to remain "absolutely, positively" focused on safety, the highest ethical and professional standards and the needs of their customers and communities. For more information, visit news.fedex.com.