Submitted by: The World Flag 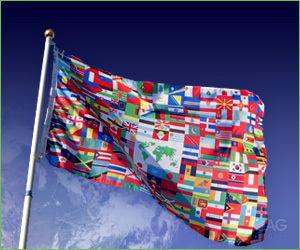 NEW YORK, Apr. 21 /CSRwire/ - Tiokasin Ghosthorse, host and producer of First Voices Indigenous Radio, NYC, brought a 3'x5' World Flag to the UN General Assembly to display during his speech on the rights of indigenous peoples. As an inspirational speaker and one who understands the power of symbols and words, his connection to The World Flag happened at a chance meeting during the San Francisco Green Festival.

Tiokasin was hoping to display the flag during his speech but it had not been "cleared" and was considered "political" by the United Nations. It is no surprise that the UN would not allow The World Flag to be displayed. By it's very nature and design, the UN may very well be the most political organization in existence. There is a very delicate balance that occurs when you assemble dignitaries, ambassadors, and world leaders from many countries to discuss rather somber world issues. The etiquette of flags and where and how to hang the flags of countries in close proximity to each other becomes a balancing act of diplomacy, decorum, and respect. Each country has a sense of pride and honor, in a sense a clinging to it's own collective ego. This is exactly what The World Flag Seeks To Transcend.

The World Flag is about breaking down the barriers, between countries, and eliminating the false boundaries created by governments. It is a symbol for the people of the world, having nothing to do with politics, or governments.

The essence of The World Flag is Teaching Unity in Matters of Global Concern, so that all people of the world realize that the major challenges facing each of us; scarcity of clean drinking water, human rights abuses, environmental degradation, scarcity of food resources, access to education, etc, are issues that affect all of us. These issues no longer exist in isolation as the world becomes more and more connected and interdependent.

The World Flag is also about sharing and celebrating cultural diversity. The colorful aspects of each countries' unique culture; its history, food, dance, language and customs are to be celebrated and enjoyed. Sharing what makes us unique and opening our eyes to new ways of being in the world, new ways of seeing each other, will allow us to work together to meet the challenges facing us all.

The designer of The World Flag chose country flags as the mark making system because of their immediate emotional connection and recognition. Symbols can be shared without speaking the same language. The World Flag works as a visual catalyst to begin the conversations of shared concern, to use that intense emotional connection of a sense of "home," and open our minds to the simple truth that the world is our shared home. We must begin to accept that all humans take pride in their sense of 'country.' Phrases such as 'our land' and 'our home' can be transcended from being about a man made or government created boundary, to a place of accepting that we all love and share this beautiful planet. The love of country is something that we all share and as Pablo Casals so eloquently put it:


"The love of one's country is a splendid thing. But why must that love stop at the border?" - Pablo Casals

Even though not the intention, by it's very nature the United Nations operates from a place of strong, delineated separation, where each countries separateness is naturally reinforced by the voting processes and organizational structure.

The original idea of a United Nations is certainly of noble intention. The extraordinary accomplishments it has achieved in the past 65 years are nothing short of astonishing. But has the UN achieved a true sense of connectedness amongst the countries of the world? Has cooperation transcended politics in matters of global concern? Is it not time for the UN to fly The World Flag and embrace what the people of the world already know? This is our shared planet, and this is our shared world.