Prior to tournament, local junior golfers make eco-friendly improvements to Redstone Golf Club, while recycling efforts during the Open encourage participants to do their part 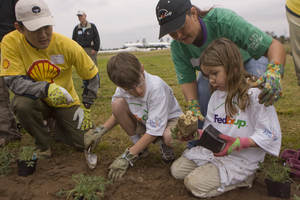 HOUSTON, Mar. 30 /CSRwire/ - As some of the world's best golfers converge on Houston to compete in the Shell Houston Open, preparations have been underway by some of the tournament and PGA TOUR sponsors -- including FedEx and Shell with Waste Management -- to make the fairways and greens a bit greener this year.

Through the FedExCup® Fore!Ever sustainable golf program, more than 100 junior golfers from The First Tee of Greater Houston and dozens of volunteers from FedEx and Shell recently worked together to make eco-friendly improvements to The First Tee's David Shindeldecker Campus at Redstone Golf Club, a three-hole practice course used by organization that is part of the Redstone Golf Course, host of the Shell Houston Open. Together with guidance from Audubon International, junior golfers and volunteers planted trees, shrubs, flowers and native grasses to improve the courses eco footprint while beautifying it for tournament spectators. As the Shell Houston Open kicks off later this week, spectators and golfers alike will be asked to do their part as well by recycling the waste that they create while watching and competing in the tournament.

"Thanks to the help of sponsors like FedEx and Shell and organizations like The First Tee and Audubon International, golf is becoming an eco-friendly sport," said Johnson Wagner, PGA TOUR Pro and 2008 Shell Houston Open winner. "As more courses work to make sustainability a priority, and more spectators and golfers make an effort to be eco conscience themselves, we can all work together to make the game more natural and less imposing on the environment."

As part of the FedEx commitment to environmental sustainability, the company launched the FedExCup® Fore!Ever campaign with the PGA TOUR, Audubon International and one of golf's premiere youth charitable organizations, The First Tee, earlier this year. The campaign is teaching local participants of The First Tee about sustainable golf practices while facilitating eco-friendly golf course improvements in communities that host PGA TOUR FedExCup tournaments. The improvements to The First Tee's David Shindeldecker Campus at Redstone Golf Club are the second of six projects scheduled throughout the 2010 PGA TOUR season. In addition to hands-on projects, FedEx also worked with Audubon International to create a "Green Golfer" curriculum that will teach young golfers nationwide about sustainable golf.

"The First Tee's mission is to impact the lives of young people by providing learning facilities and educational programs that promote character development and life-enhancing values through the game of golf," said The First Tee Executive Director Kelly Martin. "The FedExCup Fore!Ever program will help teach our young golfers about the importance of respecting and restoring the earth’s natural greenscape. It is such a valuable lesson."

"Since starting this effort, the Shell Houston Open has consistently achieved excellent diversion rates through recycling, and we are hoping to continue that legacy this year," said Steve Timms, president of Houston Golf Association and tournament director for the Shell Houston Open. "Nearly 100 recycling bins are being placed throughout the course to make it even easier for fans and golfers to do their part."

About FedEx Corp.
FedEx Corp. (NYSE: FDX) provides customers and businesses worldwide with a broad portfolio of transportation, e-commerce and business services. With annual revenues of $33 billion, the company offers integrated business applications through operating companies competing collectively and managed collaboratively, under the respected FedEx brand. Consistently ranked among the world's most admired and trusted employers, FedEx inspires its more than 280,000 team members to remain "absolutely, positively" focused on safety, the highest ethical and professional standards and the needs of their customers and communities. For more information, visit news.fedex.com.

About The First Tee
The First Tee (www.thefirsttee.org) is an initiative of the World Golf Foundation, a 501(c)(3) nonprofit organization based in St. Augustine, FL at World Golf Village, home of the World Golf Hall of Fame. Its mission is to impact the lives of young people by providing learning facilities and educational programs that promote character development and life-enhancing values through the game of golf. Since its inception in 1997, The First Tee has introduced the game of golf and its values to over 3.5 million participants in 50 states, 3,400 students and four international locations - Canada, Ireland, New Zealand and Singapore. Former President George H. W. Bush serves as honorary chairman. The First Tee Founding Partners are LPGA, the Masters Tournament, PGA of America, PGA TOUR and the USGA.

About Audubon International
Audubon International is a not-for-profit 501(c)(3) environmental education organization dedicated to providing people with the education and assistance they need to practice responsible management of land, water, wildlife, and other natural resources, thus leading to more sustainable communities. To meet this mission, the organization provides training, services, and a set of award-winning environmental education and certification programs for businesses, organizations, new developments, and entire communities. For more information, visit www.AudubonInternational.org or www.GolfandEnvironment.com.

About PGA TOUR
The PGA TOUR is the world's premier membership organization for touring professional golfers, co-sanctioning more than 100 tournaments on the PGA TOUR, Champions Tour and Nationwide Tour.

The PGA TOUR's mission is to entertain and inspire its fans, deliver substantial value to its partners, create outlets for volunteers to give back, generate significant charitable and economic impact in communities in which it plays, and provide financial opportunities for TOUR players.

In 2010, the three Tours collectively have tournaments in 34 states and in 12 countries outside of the U.S. PGA TOUR tournaments are broadcast to nearly 600 million households in 231 countries and 30 languages.

Virtually all tournaments are organized as nonprofit organizations in order to maximize charitable giving. In 2009, tournaments on the three Tours generated $108 million for local charitable organizations. The TOUR's all-time total of charitable contributions is approaching $1.5 billion. The PGA TOUR's web site is PGATOUR.COM, the No. 1 site in golf, and the company is headquartered in Ponte Vedra Beach, FL.

About the Shell Houston Open
The Shell Houston Open is the 10th oldest tournament on the PGA TOUR. It is operated by the Houston Golf Association (HGA), a 501c (3), not for profit organization. HGA has been promoting PGA TOUR golf since 1946. Since 1974 the organization has generated more than $53 million for local charity through the tournament and other golf-related activities.