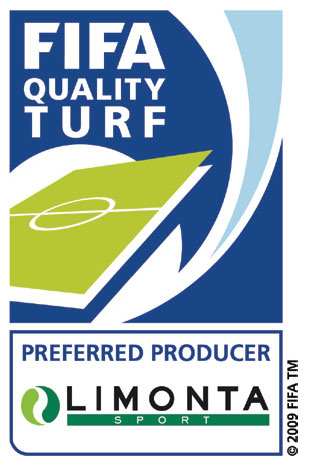 The world demand for safe, high quality turf fields has increased dramatically over the last several decades as a result of the growing enthusiasm for organized sports. On the world stage, no sport has united this enthusiasm more than soccer, and since 1981 no company has fostered this passion more than LIMONTA SPORT.

In 2001, the FIFA Quality Concept for Football (Soccer) Turf was launched. FIFA Certification Programs known as FIFA Recommended Installations, provided benchmarks for quality and performance as synthetic turf was gaining in popularity. A good synthetic turf system offers durability and practicality almost on a full time basis, as opposed to natural turf requiring high maintenance; chemicals, fertilizers and excessive amounts of water to maintain a reasonable consistency for sports. Recently, FIFA introduced the FIFA Preferred Producer Initiative, now raising the bar in recognition of the synthetic turf producers that have proven to consistently strive for the highest quality systems through research, testing, manufacturing, installation, and maintenance procedures. Limonta Sport has been doing this since 1981 and was selected by FIFA as one of only five, chosen from more than 150 synthetic turf producers and 25 FIFA Quality Concept licensees worldwide.

Even among this select group, Limonta Sport leads the way toward a healthier, safer and environmentally responsible future for athletes worldwide. When environmental and safety concerns gripped the conscience of Europe in the last decade with the proliferation of SBR, or crumb rubber from car tires, used for the infill between the synthetic turf blades. Communities and nations alike began to question its use in synthetic turf. Limonta Sport took this initiative to research and developed a safe, organic alternative that would offer even greater performance than the traditional system.

Developed and tested over the last decade, this patented and proven organic infill has revolutionized the synthetic turf market around the world. With its proprietary blend of coconut fiber and cork, or "corkonut", InfillPro Geo offers increased foot stability and lowers impact forces, or Gmax, greatly reducing the risk of injuries. Of equal significance is the fact that odor free InfillPro Geo naturally absorbs humidity from the air and releases it through an evaporative cycle similar to natural turf. By nature of its composition and these natural properties, its use in our synthetic turf greatly reduces the surface heat by almost half. This greatly reduces the risk of heat exhaustion in athletes and does not contribute to the heat island effect.

Domenic Carapella, Managing Director of Limonta Sport USA, states: "We have had the entire system of turf, backing and organic infill tested and re-tested by independent, accredited labs to determine that our synthetic turf and organic infill system contains undetectable amounts of lead, and other heavy metals and volatiles; eliminating the threat of urban water run-off, contaminated soil and associated health concerns. InfillPro Geo is made from recycled natural products and therefore can be recycled once again into the natural surroundings after the life cycle of the turf, a consideration that led to our endorsement by the National Green Energy Council. Our system, marketed as GEO TURF in North America, is guaranteed for eight (8) years and is offered with Third Party Warranty Insurance. We are extremely proud to have the opportunity to offer these products to the North American market and do our part to keep children and athletes safe as well as keeping our planet healthy"

Limonta Sport has been sold in over 70 countries with over 17,000 installations since 1981. To learn more, please visit our website: www.geoturfusa.com