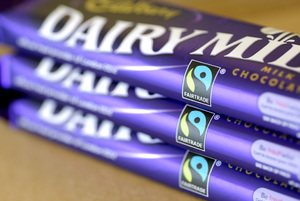 Cadbury Dairy Milk launched its new Fairtrade-certified chocolate bars today, becoming the first mass market chocolate to gain certification from the Fairtrade Foundation. The independent FAIRTRADE Mark appears prominently on the new packaging, and will bring the logo into millions more homes in the UK for the first time.

The Fairtrade Cadbury Dairy Milk bars coming off the line today demonstrates the ongoing commitment by both Cadbury and the Fairtrade Foundation to secure the economic, social and environmental sustainability of cocoa farming communities in Ghana. It builds upon the work of the groundbreaking Cadbury Cocoa Partnership (CCP), which was launched in 2008.

Cadbury has committed to offering the new Fairtrade bar at no extra cost, and with no change to the taste. Research carried out by the Fairtrade Foundation revealed that the two biggest barriers to increased purchase of Fairtrade products in the UK are lack of availability or visibility in-store and perceptions of price.

Trevor Bond, MD of Cadbury Britain and Ireland says, "Having announced our intention to achieve Fairtrade certification for our flagship brand, Cadbury Dairy Milk, only a few months ago, it is exciting that these bars are now rolling off the production lines in Bournville. This creates a tipping point for Fairtrade with Fairtrade Cadbury Dairy Milk bars available to all, with the same great taste and at no extra cost. I've seen the new bars and I feel enormous pride that we are the first mainstream confectionery product in the UK to display the FAIRTRADE Mark.

Fairtrade Cadbury Dairy Milk is the start of a new dawn for Fairtrade and for Cadbury. We will continue to work together to explore what else is possible with other brands and in other markets."

Harriet Lamb, Executive Director of the Fairtrade Foundation, says, "This is a real milestone for Fairtrade and for cocoa growers in Ghana. Cadbury Dairy Milk will create a step change in awareness of Fairtrade here in the UK, whilst in Ghana, it could potentially transform the lives and opportunities for thousands of people in cocoa growing communities. From today, lovers of Cadbury Dairy Milk will be able to make their purchase in the knowledge that they are supporting a brighter future for very small scale cocoa farmers, their families and their villages."

In a matter of months, Cadbury has moved from announcing its plans for Fairtrade certification, to manufacturing Fairtrade chocolate. Realising this commitment will accelerate Fairtrade into the mainstream, whilst tripling the amount of cocoa sold under Fairtrade terms in Ghana from approximately 5,000 to 15,000 tonnes.

Cadbury Dairy Milk Fairtrade is part of Cadbury's broader commitment to develop a sustainable business strategy to empower farmers to invest in their land and their communities. Through the Cadbury Cocoa Partnership (CCP), Cadbury is investing £45 million over the next ten years to secure sustainable cocoa farming in Ghana, India, Indonesia and the Caribbean where the cocoa farming industry is facing increasing challenges. So far, the CCP's partnership model with charities and NGOs on the ground in Ghana has achieved the following:

Cadbury estimate that by 2018, through today's announcements and the CCP, it will have made a demonstrable difference to the lives of around half a million farmers in Cadbury's cocoa markets.

The new packaging for the Fairtrade Cadbury Dairy Milk bars will also contain the London 2012 Olympics logo, to reflect Cadbury's sponsorship of the Games.

For more information, and to set up interviews, source images and b-roll, please call:

2. Over 4,500 products have been licensed to carry the FAIRTRADE Mark. Seven in 10 households purchase Fairtrade goods, including an extra 1.3 million more households in the last year. UK Fairtrade sales reached an estimated retail value of £712m in 2008, a 44% increase on 2007. There are over 430 producer organisations selling to the UK and 632 certified producer organisations globally

About Cadbury plc:
Cadbury plc is a leading global confectionery company with an outstanding portfolio of chocolate, gum and candy brands. It has number one or number two positions in over 20 of the world's 50 largest confectionery markets. Cadbury also has the largest and most broadly spread emerging markets business of any confectionery company. With origins stretching back nearly 200 years, Cadbury's brands include many global, regional and local favourites including Cadbury, Creme Egg, Flake and Green & Black's in chocolate; Trident, Clorets, Dentyne, Hollywood, Bubbaloo and Stimorol in gum; and Halls, Cadbury Eclairs and The Natural Confectionery Company in candy. For more information visit www.cadbury.com