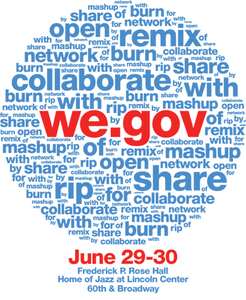 Now in its sixth year, the two day event will be the most comprehensive to date, as an unprecedented cross-partisan roster of more than 1,000 opinion makers, political practitioners, technologists, journalists and bloggers converge to network, exchange ideas and explore the explosion of voter-generated content in 2008; the prospects for a new kind of e-democracy and collaborative governance; and all the ways the Internet, social networks, and mobile communications are fostering more transparency, accountability and innovation. This year's theme is "We.gov," focusing attention on how people are using the Internet and interactive communications technologies to transform governance through political campaigns, media, and civic action. Individuals can receive conference updates and share ideas with the organizers thru twitter.com/pdf2009.

"The Obama campaign and the election of 2008 ended the argument as to whether the Internet matters in politics. Now the political and media establishments are rushing to catch up to and define what democracy in the 21st century will be," said Andrew Rasiej, founder and executive producer of the Personal Democracy Forum. "Technology is changing civic society in ways that are challenging politicians, advocates, and organizations across the political spectrum to rethink their entire strategy for success."

"The new question we're tackling this year is 'Can we .gov, and how?'," added Micah Sifry, PdF's curator and the editor of techPresident.com. "After an election that saw an explosion of mass participation in all aspects of the process, now net-powered citizens expect to engage similarly with their government-how is Washington responding? We're going to hear from top public officials from both sides of the aisle, as well as top activists, who are all at the leading edge of answering this question."

The five main thematic tracks to be covered at PdF 2009, include:

Participants of the 2009 PdF include: