"Bee Good to the Planet" 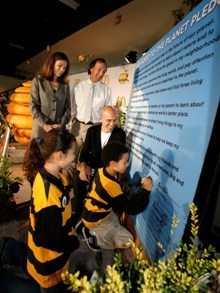 Oct. 22 /CSRwire/ - OAK BROOK, IL - October 22, 2007 - Celebrating the launch of McDonald's "Bee Movie" Happy Meal promotion, McDonald's, DreamWorks Animation SKG(TM) and Conservation International have joined together to encourage kids to have fun, learn, get outside and take action to "Bee Good to the Planet."

Beginning October 26 at McDonald's restaurants in North America and rolling out around the globe through the end of the year, McDonald's "Bee Movie" Happy Meal program features exclusive characters from DreamWorks' upcoming "Bee Movie" film from creator Jerry Seinfeld. McDonald's continues the fun online to reinforce the movie's environmental message with eco-friendly tips provided by its long-time partner, Conservation International. Kids around the world are being invited to take the "Bee Good to the Planet" pledge at both happymeal.com and conservation.org and get active in protecting the environment. McDonald's is making a difference in the field as well by directly supporting Conservation International projects in South Africa and Mexico that are working to protect important bee habitats.

"From encouraging balanced food choices and active lifestyles to inspiring environmental citizenship, McDonald's is committed to playing a positive role in children's well-being," said Mary Dillon, global chief marketing officer, McDonald's. "We know kids care about the environment, which is why we're delighted to work with Conservation International and DreamWorks to inspire kids to get out into nature and get engaged in protecting the planet."

Bee-Approved in North America
In North America, McDonald's is celebrating the arrival of the "Bee Movie" with a "Barry Approved" campaign. The promotion showcases Chicken McNuggets(TM) made with white meat and the movie's main character, Barry B. Benson, on Apple Dippers (fresh, peeled apple slices with optional low-fat caramel dipping sauce) and low-fat white Milk Jugs served in child-friendly containers. The kids' digital community encouraging kids to make "eco-pledges" to protect the environment, will be available in English in the U.S. on October 26 at www.happymeal.com.

Under the expert guidance of Conservation International, McDonald's has successfully developed a global sustainable supply chain vision and specific adjoining guidelines that have contributed to continuous improvement in environmental performance throughout the McDonald's supply chain. Most recently, McDonald's is supporting their efforts to preserve precious bee habitats in Mexico and South Africa.

"As our first corporate partner, McDonald's has demonstrated ongoing environmental commitment and leadership by improving their own business practices, talking to their customers about the environment and supporting conservation efforts directly in the field," said Peter Seligmann, chief executive officer and chairman, Conservation International. "We're so pleased to extend our long-term relationship with McDonald's in this important effort to protect vital bee habitats and inform children about the small things they can do to make a big difference for our planet."

"DreamWorks and McDonald's have clearly demonstrated our commitment to making a difference," said Jeffrey Katzenberg, chief executive officer, DreamWorks Animation. "Our partnership is just one example of how entertainment properties can inspire and motivate kids and families to get involved in important topics like the environment and their own well-being."

"Bee Movie" Around The Globe At McDonald's
The excitement of the "Bee Movie" will be brought to life in McDonald's markets around the world. Examples include:

Canada: "Bee Movie" characters will be featured on Happy Meal packaging with Apple Slices and Milk Cartons. Honeycomb-flavored Sippah(TM) straws will be available with the purchase of McDonald's Milk Jugs. Also moms will be recognized for their heroic efforts through the "Queen Bee" sweepstakes.
Australia: McDonald's restaurants will have "Bee Movie" themed PlayLands. Customers also have the chance to win a fantastic 'money can't buy' "Bee Movie" prize - the opportunity to travel to Canada to visit the Activision Animation Studio to see what they'd look like as animated characters.
United Kingdom: McDonald's UK will be launching a new pineapple and grape fruit bag featuring graphics from the "Bee Movie." To highlight the importance of bees and the process of pollination to the environment, there will be an on the box competition for children called "Draw one, Plant one" that asks them to draw their own "bee friendly" flower. Each child who submits a flower drawing will receive a packet of flower seeds to plant.
Latin America: The "Bee Movie" Happy Meal promotion will run under the "Nutrition" JaJa Mundo theme. In addition, an educational campaign for consumers will be launched featuring "Bee Movie" characters to foster good will and good citizenship attitude towards taking individual actions to make a positive impact.

McDonald's Online Kids' Platform
The "Bee Movie" characters make their debut on McDonald' online kids community dedicated to kids' well-being, physical activity and fun with a purpose. The site, which launched with "Shrek's Treketh to Adventure" in May, is designed to stimulate imagination and activity through online games and energetic, offline activities and challenges. McDonald's "Bee Movie" website invites children to make "eco-pledges" - online promises to improve the environment through real-world environmentally friendly activities. Kids are encouraged to get outside and explore nature and to discover how their small contributions can help impact the world around them. Digital downloads are also available including screensavers and IM buddy icons.

This "Bee Movie" kids' digital community will be available in English on October 26 at www.happymeal.com and will roll out around the world in 10 languages through mid-January 2008 as the film is released.

"Bee Movie" Happy Meal Promotion TV Commercial
As part of McDonald's DreamWorks partnership, the studio has created original animation for McDonald's new global TV commercial, which features the voice of Jerry Seinfeld in the English- language version. The ad will be customized by countries and will begin airing October 26 in the U.S. featuring Chicken McNuggets made with white meat, Apple Dippers and low-fat white Milk Jugs, and in select countries around the world throughout the coming months.

About The "Bee Movie"
DreamWorks Animation's "Bee Movie" features the comic talents of Jerry Seinfeld and tells the story of Barry B. Benson - a recent college graduate bee who wants more out of life than making honey. When Benson ventures out into the world and learns that humans have been stealing honey from bees for centuries, he takes his case to court, and wins. Victory is sweet until the balance of nature is upset, and Barry B. Benson must prove that even a little bee can change the world.

About McDonald's
McDonald's is the leading global foodservice retailer with more than 30,000 local restaurants in 118 countries. Approximately 70 percent of McDonald's restaurants worldwide are owned and operated by independent, local men and women. Please visit www.mcdonalds.com to learn more about the company.

McDonald's is the world's leading global food service retailer with more than 35,000 locations serving approximately 70 million customers in more than 100 countries each day. More than 80% of McDonald's restaurants worldwide are owned and operated by independent local business men and women.