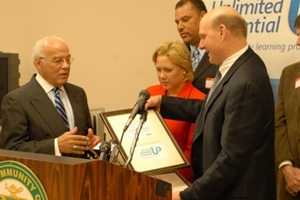 The grants Microsoft awarded to nonprofit partners in Louisiana and Texas today are part of Microsoft’s Unlimited Potential 2007 program investments of $55 million worldwide. Unlimited Potential was started in 2003 to broaden digital inclusion and meet the need for computer literacy in society and the workplace. Microsoft’s goal is to provide, by the year 2010, a quarter-billion underserved people around the world with access to the technology and technology skills training they need to improve social and economic opportunities for themselves and their communities.

By working with local business and government representatives, who are the experts in their respective communities, Unlimited Potential provides the necessary training to help foster local economic growth. Toward this end, Microsoft has now invested $255 million in more than 800 projects around the world.

Making a Difference in the Gulf Coast Region

Speaking at the Jefferson County Workforce Center - a work-force training and resource center for New Orleans residents, supported in part by Delgado Community College - Ballmer and Xavier University president Norman Francis, who is also chairman of the Louisiana Recovery Authority, discussed the continued economic needs in Louisiana and Texas and the potential that training and technology have to help these citizens achieve economic and social empowerment.

"In a post-Katrina world, retaining and rebuilding a skilled work force is critical to the future of the Gulf Coast economy," Ballmer said. "Microsoft is committed to working with our Gulf Coast partners to help expand opportunity for people and businesses throughout this fantastic region."

U.S. Sen. Mary L. Landrieu joined Ballmer and Francis on stage to discuss the region’s economic growth and how Microsoft’s $1.7 million donation will help equip the work force for employment in the information economy.

"Public-private partnerships such as that between Microsoft and the communities of Louisiana are prime examples of what can be done to move our state forward and to make Louisiana even more competitive as we recover from hurricanes Katrina and Rita," Landrieu said. "I thank Microsoft for its help with this innovative initiative. Its technological expertise will provide important tools for our recovery and will help our workers - young and old alike - develop the skills they need to gain employment in the growth industries of the future."

In addition to the commitments outlined by Ballmer today, the company and its employees invested more than $11 million in cash contributions and technology solutions in the months immediately following Hurricane Katrina. This included donations to the United Negro College Fund and the Thurgood Marshall Scholarship Fund to assist faculty and students impacted by Hurricane Katrina, as well as the development of KatrinaSafe.org, a Web site designed to consolidate data on missing persons and evacuees to help families locate and register missing relatives. KatrinaSafe.org provided a foundation for the American Red Cross’s Safe and Well Web site, a tool that will be the standard for exchanging welfare information in the immediate aftermath of a disaster. In recent months, Microsoft joined a number of other major American corporations in an unprecedented effort to channel long-term, private-sector funding to the Gulf Coast as part of the $1 Billion Gulf Coast Rebuilding Challenge.

In addition to direct contributions, Microsoft is advancing the important issue of work-force development by engaging with other businesses, work-force investment boards and government representatives who are taking a leadership role in providing the computer skills essential to employability in today’s economy. The company is a sponsor and participant in the National Association of Workforce Boards (NAWB) Forum 2007, which wraps up in Washington, D.C., on Feb. 27. At last year’s NAWB Forum, Microsoft entered into a two-year alliance with the U.S. Department of Labor to further advance technology skills and training programs by funding One-Stop Career Centers around the country.
More information about Unlimited Potential grants can be found at http://www.microsoft.com/about/corporatecitizenship/citizenship/giving/programs/up/grants.mspx.

Founded in 1975, Microsoft (Nasdaq "MSFT") is the worldwide leader in software, services and solutions that help people and businesses realize their full potential.

Microsoft is a registered trademark of Microsoft Corp. in the United States and/or other countries. The names of actual companies and products mentioned herein may be the trademarks of their respective owners.

Note to editors: If you are interested in viewing additional information on Microsoft, please visit the Microsoft® Web page at www.microsoft.com/presspass on Microsoft’s corporate information pages. Web links, telephone numbers and titles were correct at time of publication, but may since have changed. For additional assistance, journalists and analysts may contact Microsoft’s Rapid Response Team or other appropriate contacts listed at www.microsoft.com/presspass/contactpr.mspx.

Founded in 1975, Microsoft (Nasdaq: MSFT) is the worldwide leader in software, services and solutions that help people and businesses realize their full potential.