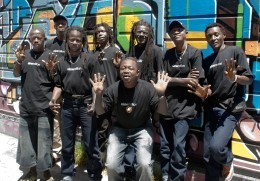 As former refugees who can directly speak to the plight of refugee children, the band members were eager to join the campaign. Ninemillion.org is an innovative global campaign led by the UN Refugee Agency (UNHCR) with founding partners Nike and Microsoft/MSN to raise awareness and funds to bring education and sport programs to many of the world's refugee youth. The campaign represents the nine million refugee youth across the globe, many of whom do not have the opportunity to learn and play.

"In the refugee camps we found the most traumatized youth--those who had lost family, had been maimed, or had been taken as child combatants--and we focused on helping them," said Koroma, who taught at a school during his time in a refugee camp and will assume an individual role as advocate for the campaign. "In addition to music and theater, we had the greatest success in helping them achieve a sense of normalcy through sports and basic schooling. We sincerely hope that ninemillion.org can expand on these efforts to reach the millions of youth still in need."

Sierra Leone's Refugee All Stars' 'Living Like A Refugee' album, released on September 26 by Anti- Records, features an insert about ninemillion.org with a portion of the proceeds from the sale of the CD to be donated to the ninemillion.org fund. Beginning November 10, the campaign's website, ninemillion.org, will also feature the album's single, 'Living Like A Refugee.' MSN Music, at http://music.msn.com, is featuring the band to further promote sales of the album and to extend its support of the campaign. This feature allows users to listen to album tracks, purchase the album and receive up-to-date information about the tour.

The album 'Living Like A Refugee' was recorded as part of the production of a documentary film about the band. Filmmakers Zach Niles and Banker White and musician/Record Producer Chris Velan met the band in a refugee camp in 2002 and followed their story over the course of three years. The resulting film, "Sierra Leone's Refugee All Stars" (SLRAS) is one of the most acclaimed documentaries of the year, winning more than a dozen awards at film festivals around the world. The film traces the incredible journey of the band members from their native Sierra Leone in West Africa during that country's brutal 10-year civil war, to refugee camps in neighboring Guinea and eventually the realization of their dream to record their music in a proper studio -- resulting in the critically acclaimed album 'Living Like A Refugee.' The filmmakers are hopeful that the SLRAS documentary will be released in theaters in early 2007 in collaboration with ninemillion.org. Films from ninemillion.org, detailing the lives and dreams of refugee youth from Azerbaijan, Uganda and Thailand, can be viewed on the campaign's website.

"We are all, the world over, touched by the refugee experience. The story and music of Sierra Leone's Refugee All Stars brings that experience to a level of deep emotional connection fueled with reality and hope," said Wendy Chamberlain, Deputy High Commissioner for the UNHCR. "We are very pleased to announce the campaign's partnership with the band to bring the message of ninemillion.org to audiences around the world."

In addition to the awareness about refugee youth raised on tour and with the sale of 'Living Like A Refugee,' SLRAS will encourage fans to visit ninemillion.org and make a donation to show their support for refugee youth. All donations will go to UNHCR to benefit the ninemillion.org fund, where two-thirds will be distributed by UNHCR to support education in refugee communities, and the remaining one-third will fund access to customized sport and play programs with an emphasis on getting girls and young women onto the playing field.

Ninemillion.org is an innovative global campaign led by the UN Refugee Agency (UNHCR) with founding partners Nike and Microsoft/MSN to raise awareness and funds to bring education and sport programs to many of the world's refugee youth. The campaign represents the nine million refugee youth across the globe, many of whom do not have the opportunity to learn and play. Nine million faces, nine million names. Nine million stories. Help them learn. Help them play. For further information visit www.ninemillion.org.

The seven touring members of SLRAS range in age from 19 to 50 and each member brings a unique musical element to the group. The 19-year-old goes by the hip hop stage name Black Nature, while some of the older members play traditional West African goombay music. Add elements of reggae and rhythmic traditional folk and you have a live experience unlike any other. Though SLRAS formed in a refugee camp in remote West Africa, they have taken their infectious music and message of peace to the world this year. For further information visit www.sierraleonesrefugeeallstars.com.