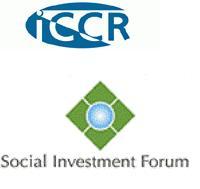 WASHINGTON, D.C. - August 29, 2007 - The Social Investment Forum (SIF) and the Interfaith Center on Corporate Responsibility (ICCR) today launched a major new Web-based effort at www.SaveShareholderRights.org as part of their campaign to oppose controversial proposals at the U.S. Securities and Exchange Commission (SEC) that would seriously undermine the rights of investors.
The SIF/ICCR Web site aims to both: (1) enlist 500 institutions and financial professionals to sign a joint statement opposing the SEC proposals; and (2) help facilitate the filing of several thousand comments by individual investors, with copies of the comments going both to the SEC and the individual investors' elected members of the U.S. House and Senate.

The new www.SaveShareholderRights.org is one of a number of efforts that will be mounted by SIF, ICCR and other concerned groups and investors before the comment period on the SEC proposals expires on October 2, 2007. The new SIF/ICCR Web-based campaign aims to surpass by a significant margin the 1997-1998 campaign in which more than 300 socially responsible, religious, labor and other groups joined forces to oppose an earlier SEC staff plan to gut the shareholder resolution process. The groups prevailed in that fight and the SEC was forced to back down, withdrawing the widely criticized proposal.

The customizable email comment for individual investors to send to the SEC and Capitol Hill reads, in part, as follows: "I oppose any action by the Securities and Exchange Commission to weaken the rights of Americans to present resolutions for votes by the millions of investors like me who own stock in companies. I urge the SEC and, if necessary, Congress to stop any initiatives that would limit the rights of shareholders to sponsor proxy resolutions or prevent investors from nominating members of corporate boards. My bottom line here is simple: I believe that it would be better for the SEC to take no action on their shareholder resolution initiatives than it would be for the Commission to destroy the rights of shareholders. I am worried that the SEC is on the wrong track."

SIF Board Chair and Senior Vice-President of Walden Asset Management Tim Smith said: "We are investors and representatives of investors who take seriously our rights and our responsibility to be engaged and informed as shareowners of companies. We strongly oppose proposals at the SEC to either eliminate the shareholder resolution process or make it more difficult to sponsor resolutions. We also oppose any step to make it more difficult for investors to help nominate directors.

Shareholder advocacy is vitally important in communicating with corporate boards, management and other investors on key issues such as climate change, governance reforms, employee diversity, executive compensation, and human rights in overseas factories."

ICCR Executive Director Laura Berry said: "It is time for American investors large and small to voice their concerns to the SEC and Congress. As representatives of faith-based institutional investors, investment managers and other allies, the members of the Interfaith Center on Corporate Responsibility are deeply committed to protecting this important link between morality and markets. We are united in our resolve to protect our right to continue to be active owners of corporate America and we intend to vigorously communicate our concerns to the SEC. We have worked for over 35 years with companies, protecting and strengthening a process that has served shareholders and publicly held corporations well."

"Shareholder resolutions are a critical tool for investors to ask corporations to disclose the business risks of climate change and other sustainability issues" said Chris Fox, investor programs director at Ceres, a leading coalition of investors and environmental groups working with companies to address environmental challenges such as global climate change. "In more instances than not, shareholder resolutions have led to productive dialogues and positive results with companies. Without resolutions prodding companies to act, the vitally important issue of climate change would not have attained the prominence it has."

The sign-on statement continues: "We also support the right of investors to nominate board members using the proxy process and urge the SEC to have a reasonable level of shares required for the nomination process. Under one approach raised by the SEC, such shareholder involvement would be barred outright, whereas another approach outlined by the Commission is so onerous as to make such involvement all but impossible."

ABOUT SIF, ICCR AND CERES

The Social Investment Forum (http://www.socialinvest.org) is the national membership association for the social investment industry. It is dedicated to the concept, practice, and growth of socially responsible investing. The Forum's 500-plus members include financial planners, banks, mutual fund companies, research companies, foundations, and community investing institutions.

The Interfaith Center on Corporate Responsibility (http://www.iccr.org) is a coalition of nearly 300 faith-based institutional investors, representing over $100 billion in invested capital. ICCR members bridge the divide between morality and markets by envisioning a civic economy that integrates ethical, environmental and social values. Inspired by faith, committed to action, ICCR members work to build a just and sustainable global community.

Ceres is a leading coalition of investors, environmental groups and other public interest organizations working with companies to address sustainability challenges such as climate change. Ceres also directs the Investor Network on Climate Risk, a network of 60 institutional investors managing $4 trillion in assets focused on the business impacts of climate change. For more information, visit http://www.ceres.org

EDITOR'S NOTE:A streaming audio recording of the related news event will be available on the Web as of 6 p.m. EDT on August 29, 2007 at http://www.saveshareholderrights.org/news.cfm.