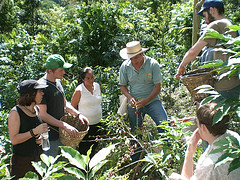 Oct. 02 /CSRwire/ - - October 2, 2008 - For more than twenty years Equal Exchange has been a pioneer in redefining corporate structure and in raising awareness of fair trade practices with farmers around the world. As one of oldest thriving cooperatives in America, they are deeply respected not only for the way they run their own business, but for being a company that has long lived its mission: to create a new model of bringing the best from farms to the consumers in a manner that is direct, fair and sustainable to all.

Today, 100% of Equal Exchange products, including coffee, tea, and chocolate, are fairly traded, benefiting 39 small farmer cooperatives in 19 countries around the world. With over 100 employees in four offices on two coasts, Equal Exchange, continues to develop new initiatives, products, and programs, all while growing at 15-25% a year.

Emily Polk: What are the biggest projects Equal Exchange is working on right now?

Rodney North: We are working hard to help people think about the whole food chain – from the farm to the table. Thankfully many people are beginning to think about things like food miles, GMO's, and the problems of factory farms and animal welfare. But there are other links in the food chain that are often forgotten. For example, your organic coffee is good for you, and for the Earth, but how is the farmer and her family doing? Similarly, Fair Trade products are picking up momentum in the grocery stores but so are corporate efforts to dilute it. We're trying to shed light on that threat and re-direct Fair Trade to its origins in the small farmer co-op movement. And what about the enterprises between the farmer and you – the food manufacturers and retailers? Here, too, there are choices to make. At Equal Exchange we're fighting the corporate consolidation of the food system and encouraging people think long and hard about where their food really comes from.

This is one reason we're going beyond the grocery stores and working with folks in places like the local school, church or synagogue. We've created a comprehensive fundraising program for schools featuring all Fair Trade products. Plus, we created a 16-unit curriculum to complement the fundraiser. We continue to expand our Interfaith program and now have formal partnerships with 10 faith-based groups that represent the Catholic, Lutheran, Methodist, Presbyterian communities. We're also expanding our work with the Jewish and Muslim communities.

Another important project is a new education/action campaign centered on our first-ever blog (called Small Farmers. Big Change.) Sometimes not even Fair Trade and organic agriculture is enough. We’ve learned that even as our organic farmer partners nurture their local environment global climate change is causing havoc for them. Just as polar bears and the ice caps are at the frontlines of climate change so are the world's tropical mountain regions – places where the world's coffee, cocoa and tea are grown. Climate change means the destabilization of weather. Temperature patterns are out of whack, so with the blog and related efforts we're educating people about the connection between their food choices, farmers, and climate change. Plus we're trying to raise tens of thousands of dollars to help our farmer partners with their ongoing climate-mitigation projects.

EP: Equal Exchange has developed the first branded, company-specific Certificate of Deposit. How did that come about?

RN: For 22 years we have been trying to pioneer new ways of doing business, but you can't get around needing capital. And depending on the terms capital can also break a business, especially a mission-driven one like ours. Look at Ben & Jerry's, The Body Shop and others. So we have to raise capital on our own terms, even when it means growing more slowly. Our latest innovation was to transform a normally generic financial product – a certificate of deposit – where the depositor typically knows nothing about what's done with his or her funds. By collaborating with Wainwright Bank we created the "Equal Exchange CD", where the funds won’t go just anywhere, but are dedicated for use in growing our business. This simultaneously: creates a socially responsible CD for the public; offers those who love our coffee, tea, etc., a new way to get involved; leverages the enthusiasm of our loyal customer base; and, not least, creates a source of affordable capital that allows us to scale up even while protecting our independence. So far we’ve raised $400,000 through the CD sales, but that's just a start.

EP: You spoke earlier of the importance of democracy in the workplace. What does that mean?

RN: Democracy in the workplace is a simple idea that's long overdue, especially in a country that is otherwise rightfully proud of its democratic traditions. And just as democratic governments vary in form and culture, so do democratic workplaces. At Equal Exchange we’re structured like a small-town government where the citizens elect a city council to represent their interests and oversee a professional city manager, who in turn is accountable to the citizens.

To be specific Equal Exchange is a worker co-operative, one of the largest and most successful in the country. We, the 85 "workers-owners", regardless of rank or seniority, each possess one share of stock and one vote. We nominate and elect the board of directors, mostly from our own ranks. And just like a city council the board hires and oversees a professional manager (or two) to make sure the needs and goals of Equal Exchange are met.

By contrast we all know that many, maybe most, workplaces are pretty feudal in character. Workers are treated more like furniture or equipment than human beings. In fact, sometimes equipment is treated better. Workers have no right to speak up, to information, to elect their leaders, and so on. While we don’t have illusions of huge corporations being democratized overnight there's no technical reason to wait. We especially hope that as new companies are created entrepreneurs will consider workplace democracy and employee ownership (as ownership is what ultimately enables workers to protect their workplace rights.) Right now two groups, the U.S. Federation of Worker Cooperatives, and WorldBlu, are helping to show how dozens of companies are doing this successfully, and profitably, today.

EP: Halloween is just around the corner. Last year everybody was talking about your "Reverse Trick or Treating" campaign. Can you tell me more about it?

RN: We've been encouraged that so many want to get involved in this campaign and want to educate others about the persistent problem of forced child labor in the cocoa industry. Last Halloween, we partnered with the human rights groups Global Exchange and the International Labor Rights Forum, and others to create the "Reverse Trick-or-Treating" campaign. Together we distributed 45,000 bite-sized pieces of our organic Fair Trade chocolate attached to informational cards. Volunteers, mostly trick-or-treating families, in 200 cities and towns nationwide then distributed these 'reverse" cards to their neighbors as they went door-to-door on Halloween night. This year we expect to reach over 200,000 households.

EP: But it's not just the cocoa industry you are raising awareness about. You have been really active in not only creating the Fair Trade model, but also in making sure it doesn't get corrupted.

RN: We worry that in the Fair Trade category there is an over-emphasis on maximizing the volume of Fair Trade sales, sometimes at the expense of the quality of transformation in farming communities. One quick way to ramp up sales is to slap a Fair Trade label on something that is already easily available, like tea or cut-flowers from large plantations, thereby eliminating the need to cultivate a supply chain of farmer co-ops, as had been the norm with Fair Trade coffee or cocoa. There is a debate within the Fair Trade community about this.

For example, unbeknownst to most people nearly all Fair Trade Certified(TM) tea is sourced from large-scale plantations, even though much of the worlds tea is actually grown on small farms. As one of the Fair Trade pioneers we oppose this dilution of the original Fair Trade model. One way to voice our opposition was to create a unique line of small farmer Fair Trade teas. At great trouble and expense we created a supply chain of co-ops of small-scale tea growers in South Africa, Sri Lanka and India to provide us with high quality organic tea. And to draw further attention to the issue we've opted to not use the Fair Trade seal. We hope that triggers more conversations like this.

EP: How do you decide what's most important to focus on?

RN: First we look at the mission statement the worker-owners wrote 13 years ago and updated more recently. That's like our permanent raison d'etre, our guiding star. Then we look at the 20-year vision the worker-owners approved in 2006. That gets more specific and lays out some really ambitious but measurable goals – like "creating a cooperative community of 2,000,000 committed participants." From there the Board asks management to create four-year plans that move us toward those 20-year goals.

But your question gets to a quandary that mission-driven companies have all the time. No matter how successful you have very finite amounts of time and money, so how do you invest it? Maybe it's like cooking a meal – you have to multi-task and attend to many goals at once. You have to watch the rice even as you make the salad. It's not one or the other. But once one goal is reached you can switch your attention to something else you want to achieve. We’re not trying to maximize profit, but rather seek only to be profitable enough. For us that means at least 2%, but no more than 7% of revenue. So, once we hit that goal we're free to put even more resources towards our other aspirations.

EP: Equal Exchange is doing so many things all at once. How do you do it?

It's like that old saying. We're basically just a big duck. On the surface we seem to be moving along placidly, but what you can't see is that under the water we're paddling like crazy. It's not easy doing all this, yet it works.