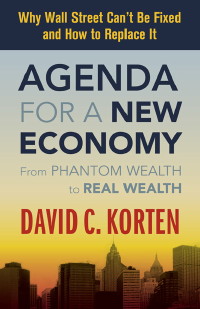 SAN FRANCISCO, CA. - FEBRUARY 9, 2009 - Today's economic crisis is the worst since the Great Depression. However, as David C. Korten argues in Agenda for a New Economy: From Phantom Wealth to Real Wealth, the steps being taken to address it-including pouring trillions of dollars into bailouts for the Wall Street institutions that created the mess-do nothing to deal with the reality of a failed economic system. It's like treating cancer with Band-Aids. And the financial collapse now in the public spotlight is only the tip of the iceberg. The system's social and environmental failures may ultimately be even more destructive.

In Agenda for a New Economy, Korten identifies the deeper sources of the failure: Wall Street institutions that have perfected the art of creating "wealth" without producing anything of real value: phantom wealth. Its major players engage in speculative trading, buy into asset bubbles, create debt pyramids, and engage in predatory lending practices. Their seeming success created an economic mirage that led us to believe the economy was expanding exponentially, even as our economic, social, and natural capital eroded and most people struggled ever harder to make ends meet.

Our hope lies not with Wall Street, Korten argues, but with Main Street, which creates real wealth from real resources to meet real needs. He outlines an agenda to liberate the latent entrepreneurial energies of Main Street from Wall Street's deadly grip and bring into being a new economy-locally based, community oriented, and devoted to creating a better life for all, not simply increasing profits. It will require courageous and imaginative changes to how we measure economic success, organize our financial system, even the very way we create money. Korten puts forth a challenging but practical agenda, summarized at the end of the book in his version of the economic address to the nation he wishes Barack Obama were able to deliver.

Korten's intention is not to offer final answers but rather to provoke discussion of options that powerful interests prefer not be mentioned. These interests devised the system that has brought us to the brink of ruin. It's time to turn away from the Wall Street system of phantom wealth and return to an economy firmly rooted in the long-term health of people and the planet.

Advanced praise for Agenda for a New Economy

"At last, a book by one of our most brilliant economic thinkers that outlines the real causes of-and solutions to-the current economic crisis. David Korten inspires us to take actions to create a more just and sustainable world for ourselves and future generations." -- John Perkins, New York Times bestselling author of Confessions of an Economic Hit Man

"The most important book to emerge thus far on the economic crisis." -- Peter Barnes, cofounder of Working Assets and author of Capitalism 3.0

"No one should be surprised that David Korten is the first great thinker to assemble a detailed road map for a new economy where people, the planet, and communities come first." -- John Cavanagh, Director of the Institute for Policy Studies

Agenda for a New Economy: www.bkconnection.com/agendaforaneweconomy

David Korten is president and founder of the People-Centered Development Forum, Chair of the Board of YES! Magazine, and serves as a board member of the Business Alliance for Local Living Economies. He is the author of The Great Turning, The Post-Corporate World and When Corporations Rule the World.

Berrett-Koehler Publishers is a mission-based, independent publishing company located in Oakland, CA. Berrett-Koehler’s (BK) mission is - Connecting People and Ideas to Create a World that Works for All. BK publishes books in the areas of sustainable business, corporate social responsbility, leadership, social justice, politics, economics, and personal development. BK is both a B-Corp and a Benefit Corporation.