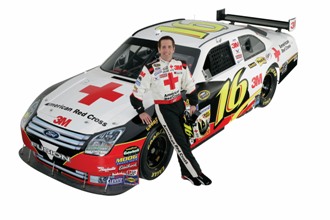 WASHINGTON, April 21 /PRNewswire-USNewswire/ -- The American Red Cross today announced the launch of Red Cross Racing, a new national campaign to recruit NASCAR fans as blood donors and raise awareness of the need to give blood. Every two seconds, someone in America needs blood.

Through the support of 3M and Roush Fenway Racing -- two highly respected organizations in the NASCAR motorsports world -- the No. 16 Ford Fusion will race this Sunday at the Aaron's 499 in Talladega, Ala. in a full paint scheme featuring the Red Cross logo. The car will be driven by Red Cross Celebrity Cabinet member and blood donor Greg Biffle.

"I'm proud to be an American Red Cross blood donor," said Biffle. "I give blood because it's easy to do and helps support our community. I hope NASCAR fans across the country will join me this racing season to help save lives, one drive at a time."

Race fans will be able to join a Donor Rewards Program by visiting redcrossracing.com beginning on April 24. This new Web site makes it easy to schedule blood donation appointments online and offers frequent donors the chance to get points, which can be exchanged for Red Cross Racing gear, including caps, t-shirts, jackets and limited edition die-cast cars. Race fans can also join Red Cross Racing at one of the nine NASCAR races where a Red Cross trailer will be on the midway. All participants who sign up between April 24 and October 1 are automatically entered into a sweepstakes for an all-expense paid trip for two to the Checker Auto Parts 500 at Phoenix International Speedway on November 9, 2008.

The Red Cross will be highly visible at NASCAR races, thanks to a nearly $2 million donation by 3M. "We're excited to join with the Red Cross to further advance its mission to increase the nation's blood supply," said Bob MacDonald, 3M senior vice president of marketing. "Our company is a long-time supporter of the Red Cross through ongoing financial and in-kind donations, and we are pleased to help launch this NASCAR opportunity."

People can give blood up to six times a year, or every 56 days, yet only about 37 percent of blood donors give more than once each year. Through this national campaign, the Red Cross hopes to increase the number of blood donations and to encourage people to give more often. The creation of Red Cross Racing seeks to expand on the organization's existing successful partnerships within NASCAR.

About the American Red Cross

The American Red Cross shelters,
feeds and counsels victims of disasters; supplies nearly half of the nation's blood; teaches lifesaving skills; and supports military members and their families. The American Red Cross is a charity, not a government agency, and depends on volunteers and the generosity of the American public to perform its humanitarian mission. For more information, please visit www.redcross.org or join our blog at www.redcrosschat.org.

A recognized leader in research and development, 3M produces thousands of innovative products for dozens of diverse markets. 3M's core strength is applying its more than 40 distinct technology platforms -- often in combination -- to a wide array of customer needs. With $24 billion in sales, 3M employs 75,000 people worldwide and has operations in more than 60 countries. For more information, visit http://www.3M.com.