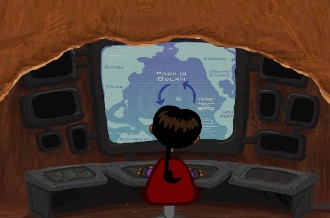 SAN FRANCISCO, CA - April 8, 2007 - SustainLane announces the release of the pilot episode of "Gorilla in the Greenhouse," an action-packed, web-based, animated show that inspires kids to take real-world steps towards a healthier planet. The show is set in a magical greenhouse in San Francisco and features a visionary green gorilla and four kids who use their imagination, their network and their music to tackle the environmental challenges facing their generation.

"Kids can save the world," says Eli Noyes, kid's TV veteran and director of the show. "This is the kind of show that will travel effortlessly from the TV to the Internet to the real world. It is by nature interactive, because kids can do in the real world what they see our virtual kids doing. Every imaginary character and action in the show has an analogous real life counterpart."

The pilot episode, entitled The Great Pacific Garbage Patch, which launches on Earth Day 2008, follows the kids as they face a demented plot by Dr. Morlon Huffelbot to create an island of plastic bags in the middle of the Pacific Ocean. In the show, the kids travel to the island to observe the situation, go undercover into the plastic bag factory and then foil the plot though multiple actions: they spread their green message through their social networks, rally cities to ban plastic bags, design a new eco-friendly bag and create awareness through their original song "Bag the Bag (The Gyre Song)."

"When I was a kid, I loved Schoolhouse Rock. The great songs and stories gave me a context for learning how the world worked," says Jay Golden, creator of the show. "Gorilla in the Greenhouse" is our way of introducing this generation to a world of possibility through story. We want to show the wildest scenarios transformed by vision, collaboration and great music. So we decided to start with a huge island of plastic bags."

The show will be broadcast through www.greengorilla.com starting Earth Day, April 22nd. At the same time, the Earth Day Network will also launch the show on their channel, www.earthdaytv.net.

The first episode is accompanied by a curriculum for teachers (created by the Earth Day Network) and features a variety of unique environmental actions and videos for kids that include: creating posters, promoting reusable bags at their local stores and creative communication with their city council. Subsequent episodes planned for later in 2008 will follow the kids through adventures exploring issues such as energy efficiency, sustainable food production, deforestation, and global warming. Each episode will include an original piece of music by the kids’ band, 'The Greenhouse Gang.'

Presented by SustainLane, a green media company based in San Francisco, the show is developed by a team with topnotch experience across kids’ and web media. The creator is Jay Golden, SustainLane’s VP of New Media, and former Free Range Studios and Shockwave.com producer. The producer is Ralph Guggenheim, a founding member of Pixar, who has previously produced Oscar-winning films like "Tin Toy" and the classic animated feature "Toy Story." "Gorilla" director Eli Noyes, an academy award nominee, has also directed segments for MTV's animated showcase "Liquid Television" and Sesame Street's "Sand Alphabet" and "Mad Painter." Animation, art direction and creative consultation for the show is done by Golden's former teammates at Free Range Studios, known for its wildly successful cause-based viral movies such as "The Meatrix," "Story of Stuff" and "Grocery Store Wars." The music is directed by Vir McCoy a well known Bay Area musician.

SustainLane is an independent online media company that creates social media properties intended to inspire, entertain, educate, and build community. Coming from a belief that all change starts with small steps, they are committed to the support of healthy lives, strong local economies, and a restored planet. SustainLane is headquartered in San Francisco. For more information, visit www.sustainlane.com.

If you'd like more information about this topic, or to schedule an interview with Jay Golden, please call Reenita Malhotra at 415/531-8280 or e-mail Reenita at reenita@sustainlane.com.

SustainLane is an independent online media company that creates social media properties intended to inspire, entertain, educate, and build community in the green and healthy lifestyle space. Coming from a belief that all change starts with small steps, their work is committed to the support of healthy lives, strong local economies, and a restored planet. SustainLane has three key offerings: The industry-leading SustainLane Green Ad Network (www.sustainlanegreenadnetwork.com), the most robust user-generated website on green products and services (SustainLane.com), and the highly regarded U.S. City Sustainability Rankings. Founded in November 2004, SustainLane is a privately held company based in San Francisco, CA.