Submitted by: De Lear for Congress 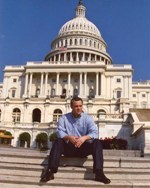 "For decades through the 1950's until the late 1960's unsuspecting residents have been subjected to deadly toxic poisons and radioactive heavy metals produced by open air testing of military hardware and reckless burning and disposal of reactor waste," said Byron De Lear, running for the US House seat representing a district in Southern California (www.DeLearforCongress.org).

The Santa Susanna Field Lab operated by Rocketdyne and owned by Boeing Aircraft in affluent West Hills was the first stop on PSR's Military Tour. "I was shocked to learn that right in my backyard is home to the world's only uncontained partial nuclear meltdown", said De Lear. "It's a 'Three Mile Island' right here in LA - and it's still radioactive," he declared.

Nuclear expert and specialist, Dan Hirsh tells the story, "They had four reactors that we know of that had serious accidents." To save money, Rocketdyne, like most other defense contractors, conducted monthly burns in open pits of radioactive and chemical waste affecting not only the four-square mile Santa Susanna site but also throughout the Southland.

Hirsh continues, "Years later, under EPA guidance, measurements were taken at a nearby children's summer camp and high levels of Strontium 90, Plutonium 238, Tritium, Trichloroethelene (TCE) and various heavy metals were found at the children's camp obviously having migrated off the Rocketdyne property."

Residents of the field lab's surrounding communities were never notified of the activities taking place at the open field lab, nor were they ever made aware of the nuclear materials that they were exposed to during spills, accidents or releases.

Boeing has denied any deleterious health effects such as increased cancer rates by workers and residents and yet has settled out-of-court with over 100 neighbors of the testing facility.

"The Bush administration has sought to minimize the perception of the human costs of its illegal war in Iraq, and now equally directs the Department of Energy to deflect any criticism of lame cleanup attempts of these contaminated sites," proclaimed US House candidate Byron De Lear. "This shows a complete disregard for the better interests of Americans and speaks of dereliction of duty - the DoD and its coterie of defense contractors must be put in check."

When queried, a high level EPA official who wishes to remain anonymous stated that the ultimate solution will be the formation of an independent agency to oversee the environmental impact of the Pentagon -- not to continue to have the Pentagon regulate itself.