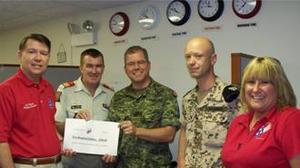 Jul. 07 /CSRwire/ - RADCLIFF, KY. - July 7, 2008 - At a barbeque held in May of this year, a group of Fort Knox international liaison officers made an unusual request. They asked the participants from the Fort Knox Historical Community not to bring the traditional "hostess gifts" but rather to make donations to USA Cares instead.

Canadian Forces Liaison, Major C. J. Young along with French Colonel Bruno Duhesme and German Lieutenant-Colonel Dirk Schuber visited and had a tour of the USA Cares Military Family Assistance Center. They also brought a donation that was made by Fort Knox Historical Society Members.

Major Young said "we have been receiving a number of great 'hostess gifts' over the years, and while we were very appreciative of people's generosity, we wanted to give back to the community, so we asked if folks would instead make a donation to USA Cares. The Fort Knox Community has responded very favorably to that idea."

Pat Stradley, USA Cares Director of Family Services commented "I think that it is just amazing that these gentlemen would forgo the gifts that would normally go to them to do something for their American comrades in arms and their families. It speaks very highly of them individually and of the brotherhood that all military, regardless of their country, have with one another."

Bill Nelson, Executive Director of USA Cares, echoed Stradley's sentiments and thanked the group for their generosity and for being great representatives of the Fort Knox military community.


About USA Cares
USA Cares is a worldwide non-profit 501 (c)(3) organization serving US Military Service Members of all ranks and branches and their families with direction and advice along with grant assistance for quality of life issues caused by military service. Continuing into their sixth year of accomplishment, USA Cares has received requests from over 11,000 Service Members and families and has responded with millions of dollars in organizational and found resources. In partnership with The Homeownership Preservation Foundation, USA Cares has also saved hundreds of homes belonging to Service Personnel from foreclosure. Funding for the organization is provided through the generous contributions of corporations, organizations and individuals. For more information on USA Cares contact jrevell@usacares.org and visit www.usacares.org.