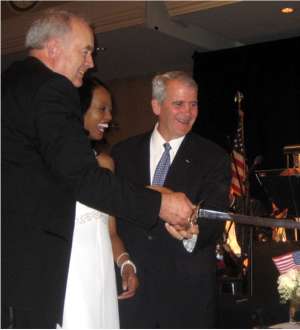 LOUISVILLE, KY "“ March 31, 2008 - The historic Seelbach Hotel was the scene of USA Cares first ever gala in celebration of five years of service to US Military Families on Saturday, March 29th. Over 225 dignitaries and guests were on hand to share the event and to hear the keynote address by Lt. Colonel Oliver North, United States Marine Corps (Retired).

"The evening was a success on every level" said William H. "Bill" Nelson, the new Executive Director of USA Cares. He added "It started with a proclamation from Governor Steven L. Beshear signifying March 29th as USA Cares Day in the Commonwealth of Kentucky. We were also recognized by the National Commander of the nation's largest veterans association, Martin F. Conatser of The American Legion." He went on "And as if we were not already elated enough, the founder of USA Cares, Command Sergeant Major Roger Stradley, US Army (Retired) received the Secretary of the Army Public Service Award signed by Pete Geren. We were pleasantly amazed by this outpouring of support."

Through sponsorships, donations, pledges and "in-kind" donations of every sort, USA Cares raised over $100,000 to continue its efforts to aid US Military Families with quality of life issues caused by a loved one's service to our country in the ongoing War Against Terror.

Major General John Tindall, US Army (retired), President of USA Cares, commented in his address to the audience that "since we don't send people to Disney World, we don't always get the glamorous press that some other organizations get". His other remarks were in thanks to all of those in the room but especially to those who were not there: The troops in the field. He made special mention of a dozen or so US soldiers in the audience from the Warrior Transition Unit at Fort Knox. These soldiers, recuperating from wounds received in Operation Enduring Freedom in Afghanistan or Operation Iraqi Freedom, were sponsored by donations and received a standing ovation from the entire crowd on their introduction as a group to the audience at large.

Colonel North, in his address said "One of the most memorable sights is to see Iraqi women exiting the polling place holding up that purple index finger signifying they had just cast their vote. You know that they did not vote to have their child be a suicide bomber because free people don't do that kind of a thing." He also noted that "These US service personnel in Operation Enduring Freedom in Afghanistan and Operation Iraqi Freedom are all volunteers. It is the first time since our Colonial Forefathers rose up and fought for our independence that the entire United States military force consisted of ALL volunteers for the length of time that we have now been engaged in this particular effort." Colonel North's speech lasted approximately 30 minutes and received a number of breaks for applause and a standing ovation from the audience at its conclusion.

The Master of Ceremonies for the event was WDRB Louisville, FOX 41 anchor Barry Bernson. An invocation was delivered by Chaplain Colonel Hugh Dukes, US Army (Retired). The Hilton Seelbach chef and staff served a wonderful "surf and turf" entrée of salmon and filet mignon with all the trimmings and the dessert, a red, white and blue tiered cake was first sliced with a ceremonial US cavalry saber by the trio of Major General John Tindall, Nausha Campbell, a Purple Heart Wife and USA Cares employee and Lieutenant Colonel Oliver North.

A video entitled "From Sea to Shining Sea" conceived, produced, and edited by local business man and USA Cares Board Member Bob Manning was the next event for the audience. His five minutes of video encapsulated five years of USA Cares dedication in a succinct and moving way.

Another video featured Sergeant Byran Anderson, US Army (Retired).
Sergeant Anderson received a Purple Heart in Operation Iraqi Freedom when his vehicle was impacted by a road-side improvised explosive device (ied) instantly severing both legs and one of his hands. Sgt. Anderson, now a USA Cares Spokesman, is now a working actor appearing in the soon to be released Batman film, a CSI New York episode and other films. He is also a spokesman for Quantum Rehabilitation. Sergeant Anderson is the inspiration for a new USA Cares program "Bryan's Heart" that is being developed in response to the difficulties and expenses borne by Purple Heart Veterans and their families who have considerable travel expenses for medical treatments.

Finally, acknowledgement was given to the man who envisioned the initial idea for what would later become USA Cares. Steve Langford, the General Manger of WAVE-TV in Louisville, KY had the idea to sell signs and donate the proceeds to the families who made sacrifices when their loved one and often bread-winner left his or her job to serve in the military. "It amazes me to see that five years later, our simple idea has grown into a national organization helping the families of Soldiers, Marines, Sailors, Airmen, Guard, Reserve and Coast Guard personnel as they make sacrifices to serve us and their country." he said to the audience.

USA Cares is a worldwide 501(c)(3)non-profit organization serving military service members of all ranks and branches and their families with direction and advice along with grant assistance for quality of life issues caused by military service. Continuing into their sixth year of noteworthy accomplishments, USA Cares has received requests from over 10,000 of Service Members and families and responded with millions of dollars in organizational and found resources. In partnership with The Homeowners Preservation Foundation, USA Cares has also saved hundreds of military homes from foreclosure across the Nation. Funding for the organization is provided through the generous contributions of corporations, organizations and individuals. USA Cares continues to operate at a 90 percent ratio of contributed mission dollars. For more information on USA Cares contact us at jrevell@usacares.org and visit www.usacares.org.