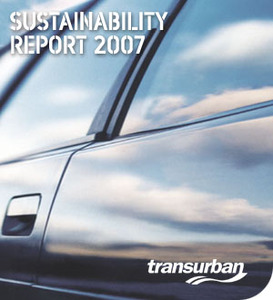 Dec. 11 /CSRwire/ - December 11, 2007 - Transurban Group has published its second Sustainability Report. The report covers activities for the financial year 2006/2007 and is available online at http://www.transurban.com.

Developments covered in the report include:

The report was independently assured and followed the GRI G3 Framework. GRI has confirmed the report's G3 'A+' application level.

For the first time, Transurban was included in the Dow Jones Sustainability Indexes World List of sustainable companies and the Carbon Disclosure Project 4 Leaders List (Australia and NZ). It is also a member of the FTSE4Good Index.

For more than 10 years, Transurban has been a world leader in the development and long-term management of complex toll road infrastructure. Transurban employs around 800 people and has interests in seven roads in Australia and the US.

To order a copy of a printed summary report, email sustainability@transurban.com.