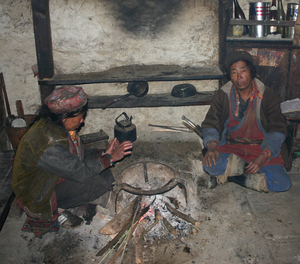 According to the WHO, IAP claims the lives of 1.5 million people a year worldwide, or one person every 20 seconds.

Sep. 25 /CSRwire/ - SEPTEMBER 25, 2007 - Independent UK charity Shell Foundation and leading US environmental nonprofit Envirofit International today announced a ground-breaking partnership that has the potential to significantly reduce the number of global deaths caused by Indoor Air Pollution (IAP) - the smoke generated by traditional fires and stoves used in developing world homes. More than three billion people, or almost half the world's population, cook in their homes using traditional fire and stoves, burning biomass fuels like wood, dung and crop waste. Day in and out families breathe in lethal fumes from these cooking fires. According to the World Health Organization, IAP claims the lives of 1.5 million people a year worldwide, or one person every 20 seconds. Women and children make up the vast majority of these deaths due to their increased exposure in the home.

Envirofit will be tasked with handling the scale-up and spin off of the Shell Foundation's Breathing Space program, [1] which was founded in 2002 to achieve significant global reductions in IAP. This new partnership is part of the Foundation's mission to see 10 million clean-burning stoves sold in five countries over the next five years. The Foundation is providing Envirofit with investment and organizational support to form an independent global entity. In turn, Envirofit International, working with their technology partner Colorado State University's Engines and Energy Conversion Laboratory, will design, develop, market and distribute clean cookstoves that are engineered to emit significantly less toxic emissions and use less fuel.

Envirofit was chosen following a long and detailed two-year process. The search focused on finding an organization that shared similar business values to the Shell Foundation and had the technology skills and proven commercial expertise to bring high-quality consumer products to the developing world.

"Solutions to IAP have not been forthcoming because the needs of the very people affected by it have not been fully considered," said Harish Hande, Managing Director of Selco India, a leading Indian social venture enterprise. "Solutions to IAP reside in creating need-based technologies and financing, which are in turn based on market principles. The partnership between Shell Foundation and Envirofit is a breath of fresh air, one that will provide the impetus for market and end-user centric solutions."

The Shell Foundation sees this partnership as one of the most exciting and important developments in its seven year history. Shell Foundation Director Kurt Hoffman said: "What makes us stand out from other development charities is our technique of applying market principles and business thinking to figure out how to tackle global developmental challenges.. With half the world's population still cooking on wood, dung and other biomass-burning stoves, the only way we are going to make a significant long-term impact and achieve the scale needed is to get private sector thinking involved.

"I am delighted we have signed up Envirofit to do just that. The staff has extensive commercial experience and they have an impressive record implementing global commercial projects."

Envirofit's particular expertise combines world-class engineering, a mature product development cycle, creative global marketing and robust, on-the-ground operations. The team works to fully understand and address barriers to adoption of products in the developing world. Through this strategy, Envirofit hopes to bring energy-efficient, pollution-reducing technologies to millions of people worldwide, where the health risks and economic burden associated with pollution are most severe.

Envirofit Chairman Ron Bills said: "Envirofit has the business and engineering know-how to make a significant positive impact on the global health crisis of indoor air pollution. Working with our world-renowned technology partner, Colorado State University's Engines and Energy Conversion Laboratory, we will deliver on this promise through a disciplined, rigorous product development process that is sustainable and fully addresses the cultural, economic, and environmental realities of our end users. We are excited to work closely with local communities, public and private sectors to create a stable, global infrastructure for getting clean stoves to those who need them most."

Envirofit International is a US-based nonprofit corporation launched in Colorado in October 2003 through funding from the Bohemian Foundation. Envirofit's work developing and disseminating technologies that reduce pollution and enhance energy efficiency in developing countries has helped the company become recognized as a worldwide leader in the challenge to produce energy efficiency alternatives. Earlier this year it won a prestigious World Clean Energy Award for its leadership in implementing broad-based energy solutions to global challenges.

Shell Foundation initially got involved with the Indoor Air Pollution issue in 2002, running nine pilots in seven countries in partnership with existing IAP actors. Commenting on the very significant role played by its partners in the past five years, Mr. Hoffman said,
"Without the valuable lessons learned from these pilots and the many organizations who worked with the Breathing Space team, we would not be in a position to spin-off the program. This is particularly the case in our lead country of India. We are extremely grateful for the input from all partners and we look forward to continuing to work with them in the future."

In a separate deal, Shell Foundation has partnered with scientists at Berkeley Air Monitoring Group [2] to carry out detailed evaluation of the stoves put into the field by Envirofit to ensure they are externally validated.

About Shell Foundation
Shell Foundation was established by Shell Group in 2000 as an independent, UK registered charity (no.1080999) operating with a global mandate. It focuses on enterprise-based solutions to poverty and environmental challenges linked to the impact of energy and globalization. It acts like an investor, identifying financially sustainable solutions to these challenges that can be taken to scale and replicated to achieve global impact. By 2010 the Foundation will have used $75 milllion to leverage $350 million from other organizations.

About Envirofit
Envirofit International, Ltd. is a 501(c)(3) nonprofit corporation that develops engineered solutions to improve the human condition on a global scale, with a primary emphasis on applications in the developing world. The corporation was formed in 2003 as an independent spin-off of Colorado State University's Engines and Energy Conversion Laboratory in the College of Engineering and the Entrepreneurship Program in CSU's College of Business. Envirofit utilizes the same rigorous product-development methodology and protocols used in modern industry to develop and commercialize energy-efficient, pollution-reducing technologies that have the greatest potential positive impact on global environmental, economic, and public health issues. For more information, visit Envirofit International's new website at www.envirofit.org.

About the Engines and Energy Conversion Laboratory at Colorado State University
The Engines and Energy Conversion Laboratory (EECL) is a unique research/education program at Colorado State University with emphasis on engines, fuels, and energy conversion technology. With a focus towards market driven solutions, products developed at the EECL, in partnership with industrial sponsors and multiple spin-off organizations, have reduced pollution in the atmosphere by millions of tons and have saved over 14 billion cubic feet of natural gas. Beginning in 2002, the EECL began a program of international technology development primarily aimed at increasing energy efficiency and reducing the environmental impact of transportation, electric power production, and cooking/household energy in developing countries.

2. Founded in 2007, Berkeley Air Monitoring Group carries out rigorous scientific evaluation of initiatives designed to improve health and well-being through improved household stoves, fuels and education. The firm has close ties to the University of California, Berkeley, and builds directly on the household energy monitoring and evaluation methods developed by the Kirk Smith Research Group.