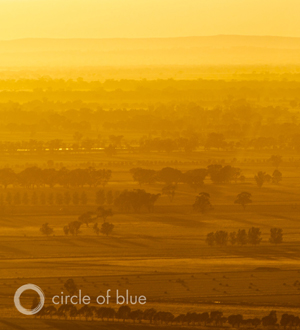 The sun-dried land between Shepparton and Deniliquin, New South Wales, Australia, is dotted with irrigated hay, wheat and other crops.
TRAVERSE CITY, MI (March 10, 2009) - Not since the American Dust Bowl of the early 20th century has an industrialized nation sustained more damage from drought and water scarcity in its prime food-growing region than in Australia's Murray-Darling Basin. This, according to an extensive multimedia report published today by Circle of Blue, the nonpartisan journalism and scientific research organization that covers global water issues.

"Climate change and the need to provide for a growing population have pushed the Murray-Darling Basin to its limits," said J. Carl Ganter, Circle of Blue's director. "Australia is used to dealing with drought, but the magnitude of what it faces in the Murray-Darling Basin is testing its ingenuity, stressing its budget and dispiriting many of its people."

With its latest report from the front lines of the global fresh water crisis, Circle of Blue examines a new pattern of dryer and hotter weather that climatologists in Australia assert is permanent.

In "The Biggest Dry: Australia's Epic Drought is a Global Warning," Circle of Blue reports that drought is damaging the nation's ability to feed itself and the expanding hunger of the world. It is imposing profound changes on the land, pushing people out of their homes, aggravating long-simmering tensions between the government and Australia's indigenous people, and causing mass die-offs of plants and animals. It is forcing the Commonwealth and four states to agree on new ways to govern in order to secure and manage water. Over $12 billion in public funds have been committed to modernize infrastructure and change growing techniques in order to conserve declining water supplies.

"Australia is at the vanguard of a major shift in how we as developed, agricultural nations thrive, survive or fail in coping with a much drier 21st century water environment," Ganter said.

While the immediate reality of the situation may be grim for Australia and potentially the world - tragic bush fires, drying wetlands, dying forests of red gum trees, failing crops and depressed communities - Circle of Blue finds resilient people rich with ideas and inquiry.

That's why Imaginatik, the London- and Boston-based collaborative technology firm, and Circle of Blue are also launching Idea Central - a novel and powerful way for people to share their thoughts, experiences, suggestions and solutions about the crisis in the Murray-Darling Basin.

Applying the "wisdom of crowds"
Imaginatik, developer of collaborative innovation and problem-solving software and processes, is providing its Idea Central software "“ "the ideas box of the digital age" - to bring together and organize Australia's and the world's best thinkers: from students to scientists, farmers to engineers, policy makers to indigenous peoples. The goal is to generate solutions to the Murray-Darling Basin's water challenge. Results, organizers say, will be valuable to people facing similar problems in other parts of the world.

"With Idea Central, we tap into the power of many, the wisdom of crowds" said Mark Turrell, Imaginatik CEO. "We face great challenges today in many parts of the world, but we have a rare opportunity to bring together the problem solvers and organize their ideas into invaluable responses that are relevant worldwide. Everyone has something to say, an idea to share, an important question to ask. That's the only way we can have a chance to respond quickly, fairly and smartly."

Idea Central is an advanced online tool that allows users to submit and share ideas and stories in realtime. The Imaginatik process is used by many of the world's leading multinational companies and universities to generate the highest level of creative problem solving.

The results and accompanying stories will be compiled and published in spring 2009.

The world watches and learns
More than five million people die each year due to a lack of safe drinking water, and the UN estimates that 5.5 billion people will lack adequate access to freshwater in the next 20 years. Water scarcity has emerged as a serious threat to peoples across the world. Called "the new oil" for the 21st century, water affects everything.

Officials in other nations are taking special note of Australia's challenges. It is the first industrialized nation in modern times to contend with such severe and prolonged drought in its prime food-growing region. It won't be the only one, assert food, water and climate experts. South America's grain-growing region is drying up. Italy, France and Spain have contended with moisture shortages in recent years. The American Southwest is in the seventh year of a steadily worsening drought that has lowered water levels by 100 feet in Lake Mead and Lake Powell, two of the largest reservoirs on earth. For the second straight year, the moisture content is far below normal in California's Sierra Nevada snowpack, which provides 60 percent of the state's water and nearly all of it for the irrigated Central Valley farm region. On February 28, California Governor Arnold Schwarzenegger declared a state drought emergency, calling for dramatic cuts in city and agricultural water use.

In addition to coverage of global water issues published daily on its site, WaterNews, Circle of Blue's front-line reporting on the water crisis, ranging from the United States, to Inner Mongolia, Mexico and Tibet, has been referenced widely by major news and policy organizations; the Council on Foreign Relations has called it a "must read." Circle of Blue receives funding from foundations, companies and individuals while ascribing to strict journalistic ethics standards.

Reporting of "The Biggest Dry" is supported by a major grant from the Alpern Family Foundation.

About Circle of Blue
Circle of Blue is the international, nonpartisan network of leading journalists, scientists and communications design experts that reports and presents the information necessary to respond to the global fresh water crisis. It is a nonprofit affiliate of the international water, climate and policy think tank, the Pacific Institute, and publishes WaterNews, the daily go-to source for global water news and data. Circle of Blue has presented at the Aspen Ideas Festival, Aspen Environment Forum, and the World Economic Forum. Circle of Blue adheres to the Society of Professional Journalists Code of Ethics. It received initial development funding from the Ford Foundation.

Circle of Blue is also co-founder of Designing Water's Future, the international contest that challenges cross-disciplinary student teams from colleges and universities around the world to develop communications design solutions focused on the water crisis.

Circle of Blue's reporting is only possible through the generous financial support of individuals, foundations and companies. Contribute online. For sponsorship opportunities, contact sponsor@circleofblue.org.

About Imaginatik
Imaginatik is the leading provider of innovation and collaborative problem solving software and process to the world's leading companies. More than 100 clients rely on Imaginatik's software, consulting and research to enable their most productive innovation activities. Named as a World Economic Forum Technology Pioneer, Imaginatik's software and services have helped companies and organizations discover new ideas and innovations used to solve complex problems.