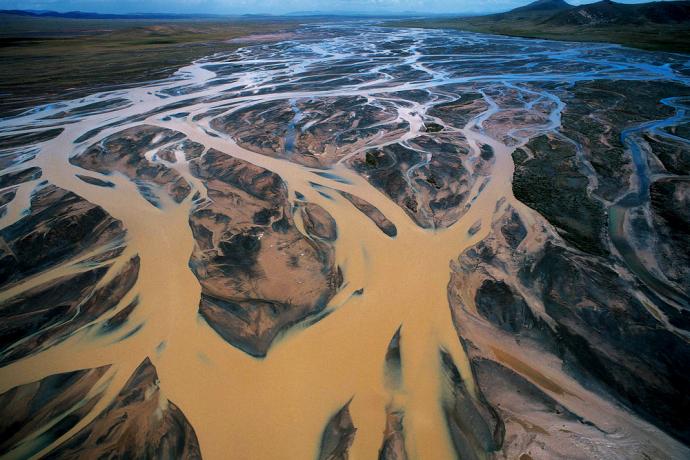 TIBET: Scientists say at least one billion people in Asia and China are at risk from declining water flows on the Tibetan Plateau. Here near its source in Tibet, the Yangtze River begins its journey through China. Photo: Greenriver - Sichuan

May 8, 2008 - Almost two years after a 710-mile (1,100 kilometer)railroad across the world's highest plateau opened from central China to the Tibetan capital of Lhasa, the deadliest clashes in a generation are occurring between Chinese police and young Tibetan protestors. The fierce fighting, which erupted in March, has produced casualties on both sides and prompted demonstrations around the world. Many analysts assert that the fighting is caused, at least in part, by fear that the Chinese government's long-standing strategy to open Tibet's vast reserves of copper, iron, lead, zinc, and other minerals will accelerate with the railroad's development.

But Circle of Blue reports that a number of influential scientists, and experts in Asian studies, now say that control and management of an even more vital resource "“ the Tibetan Plateau's vast supply of freshwater "“ is also emerging at the center of the increasingly tense political and cultural strife between China and Tibet. Circle of Blue is the independent journalism and science project reporting on global freshwater issues.

Reservoir at top of the world is retreating
The Tibetan Plateau is an oxygen-scarce landscape of enormous glaciers, huge alpine lakes, and mighty waterfalls "“ a storehouse of freshwater so bountiful that the region serves as the headwaters for many of Asia's largest rivers, including the Yellow, Yangtze, Mekong, Brahmaputra, Salween, and Sutlej, among others. According to studies by the United Nations and several prominent global environmental organizations, almost half of the world's population lives in the watersheds of the rivers whose sources lie on the Tibetan Plateau.

However, recent studies "“ including several by the Chinese Academy of Sciences - have documented a host of serious environmental challenges to the quantity and quality of Tibet's freshwater reserves, most of them caused by industrial activities. Deforestation has led to large-scale erosion and siltation. Mining, manufacturing, and other human activities are producing record levels of air and water pollution in Tibet. Together, these factors portend future water scarcity that could add to the region's volatility.

Most important, the region's warming climate is causing glaciers to recede at a rate faster than anywhere else in the world, and in some regions of Tibet by three feet (.9 meters) per year, according to a report in May 2007 by the Intergovernmental Panel on Climate Change (IPCC). The quickening melting and evaporation is raising serious concerns in scientific and diplomatic communities, in and outside China, about Tibet's historic capacity to store more freshwater than anyplace on earth, except the North and South Poles. Tibet's water resources, they say, have become an increasingly crucial strategic political and cultural element that the Chinese are intent on managing and controlling.

"At least 500 million people in Asia and 250 million people in China are at risk from declining glacial flows on the Tibetan Plateau," said Rajendra K. Pachauri, chairman of the IPCC and winner of the 2007 Nobel Peace Prize, in an interview with Circle of Blue. "This is one of the great concerns "“ a staggering number of people will be affected in the near future. There aren't too many researchers who have looked at this water situation and its far-reaching impacts."

China among driest nations
With more than a quarter of its land classified as desert, China is one of the planet's most arid regions. Beijing is besieged each spring by raging dust storms born in Inner Mongolia, where hundreds of square miles of grasslands are turning to desert each year. In other parts of the nation, say diplomats and economic development specialists, Chinese rivers are either too polluted or too filled with silt to provide all of China's 1.3 billion people with adequate supplies of freshwater.

Chinese authorities have long had their eyes on Tibet's water resources. They have proposed building dams for hydropower and spending billions of dollars to build a system of canals to tap water from the Himalayan snowmelt and glaciers and transport it hundreds of miles north and east to the country's farm and industrial regions.

But how long that frozen reservoir will last is in doubt. In attempting to solve its own water crisis, China could potentially create widespread water shortages among its neighbors. The IPCC warned a year ago that the glaciers in the world’s highest mountain range could vanish within three decades. "Glaciers in the Himalayas are receding faster than in any other part of the world and, if the present rate continues, the likelihood of them disappearing by the year 2035 and perhaps sooner is very high if the earth keeps getting warmer at the current rate," the report said.

"While the political issues swirling around Tibet and China are complex, there is no denying that water plays a role in China's interest in the region," said Peter Gleick, co-founder and president of the Pacific Institute in Oakland, California and one of the world's foremost authorities on water. "The water of Tibet may prove to be one of its most important resources in the long run "“ for China, and for much of southern Asia. Figuring out how to sustainably manage that water will be a key to reducing political conflicts and tensions in the region."

A long struggle gets worse
Tibet lies north of India, Nepal, Bhutan, and Myanmar, west of China, and south of East Turkistan. The highest and largest plateau on Earth, it stretches some 1,500 miles (2,400 kilometers) from east to west, and 900 miles (1,448 kilometers) north to south, an area equivalent in size to the United States region east of the Mississippi River. The Himalayas form much of its southern boundary, and Tibet's average altitude is so high "“ 11,000 feet (3,350 kilometers) above sea level "“ that visitors often need weeks to acclimate.

Though Tibet and China disagree about some details, the modern conflict between the two nations began in 1950 when China invaded Tibet with 40,000 troops, and a year later seized control of Lhasa. Bloody clashes have broken out between Chinese forces and Tibetans periodically since then, with particularly fierce street fighting in the 1980s, and again this spring. The new protests have attracted global attention, in large part because they are occurring just months before China hosts the Summer Olympic Games in Beijing.

The Tibetan Government in Exile, which settled in India in 1959 following the Dalai Lama’s flight from Tibet, in recent years has consistently identified the plateau's water as a strategic resource and criticized China's management of it. In a report earlier this decade, the exile government said China's water development plans, as well as global climate change, should cause concern across Asia, because it would "seriously decrease [the] water supplies of India, Bangladesh, Vietnam, Cambodia, Thailand, Laos and Burma, as well as the Yangtze River Basin as far as Shanghai, especially in drought years. Meanwhile, rural Tibetans continue to suffer high rates of hepatitis, water-borne infections, and back pain due to inadequate village water supplies."

China quietly acknowledges water tension
The Chinese government, in its studies, acknowledges the changing condition of Tibet's water supply. Last summer, the Institute of Tibetan Plateau Research, a unit of the Chinese Academy of Sciences, reported that the area and mass of the region’s glaciers had decreased 7 percent since the late 1960s. The Chinese scientists reported that the melting phenomenon was widespread, though it was not known how many of China's 46,298 glaciers were affected.

The short-term consequence of the receding glaciers, which the scientists said was due to global climate change, was that runoff in some rivers had increased. But because of the deepening dry conditions of western China, the water was evaporating before it could be used.

The Chinese study offered no recommendations for reversing the melting or better managing the Tibetan Plateau's water. Nor was there any discussion of the Chinese government's role in overseeing it. And while most scientists in the region agree that the Tibetan Plateau’s water resources are crucial to the future of China and Southern Asia, many declined to be interviewed for fear of losing access to their research sites.

Elizabeth Economy, the director of Asia Studies at the Council on Foreign Relations in New York, said it's not surprising that China is circumspect about the strategic consequences of the Tibetan Plateau's freshwater supplies. "Talking about this, or introducing it into any of their conversation about Tibet, just doesn't serve their purpose," she explained in an interview.

According to Economy, control of water resources in the Tibetan Plateau might be an issue internally, but externally, it is not. "China wants to minimize the range of issues it needs to negotiate. Once this issue of water resources comes up, and it seems inevitable at this point that it will, it also raises emerging conflicts with India and Southeast Asia. They also receive their water from the Tibetan Plateau," Economy said.

The new China-Tibet Railroad, built at a cost of roughly $4 billion, crosses terrain that illustrates China's water dilemma "“ dry high plains, teeming cities that are growing rapidly, lakes that are drying up, and glaciers that are retreating into rocky and impassable mountain ranges.

"Water is seen as a strategic asset for China wherever it occurs in China," said Geoff Dabelko, director of the Environmental Change and Security Program at the Woodrow Wilson International Center for Scholars in Washington, D.C. "Because so much of the water for China and the region originates in Tibet, it adds an additional level of importance and political sensitivity and context that does not get the attention it deserves."

Summing up the volatile situation, Dabelko added, "Nearly two billion people are dependent on water originating on the Tibetan Plateau. By definition, that makes it high politics and critically important in a politically strategic sense." [Read and hear the Entire interview with Geoff Dabelko here]