WorldBlu Announces Search for the World's Most Democratically Run Workplaces 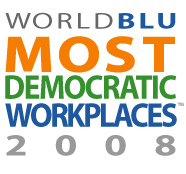 ATLANTA, GA - December 6, 2007 "“ WorldBlu, Inc., an Atlanta-based business specializing in organizational democracy, has announced a call for nominations for the second annual WorldBlu List of Most Democratic Workplaces award to be given in the spring of 2008.

The WorldBlu List of Most Democratic Workplaces is a global list comprised of organizations that operate using a democratic, rather than traditional command and control approach to business. A democratic organization can be characterized by collaboration, openness, decentralization, transparency and giving employees a voice at work. This is the second year for the award.

Organizations from the for-profit, non-profit, non-governmental and governmental sectors with five or more employees that have been in operation for a minimum of one year may apply for the WorldBlu award.
Organizations have until December 31, 2007, to apply. A survey will then be administered to applicants beginning January 1, 2008 and will close on February 29, 2008. The WorldBlu List awardees will be announced in April 2008.

"The WorldBlu List seeks to shine a spotlight on the companies pioneering the next generation of business," says WorldBlu Founder and CEO, Traci Fenton. "Command and control business models are officially old school. The WorldBlu List endeavors to recognize the vanguard "“ those organizations representing the 'new school' business model."

The application process for the WorldBlu List involves employees completing a survey evaluating their organization's practice of ten democratic principles such as decentralization, accountability, choice and transparency on a leadership level, individual level and systems and processes level.

WorldBlu developed the survey tool based on a decade of research into what makes a world-class democratic organization. The WorldBlu List of Most Democratic Workplaces is a list, not a ranking, and in the future organizations will be honored for the length of time they are on the list.

The Wall Street Journal, US News & World Report, BusinessWeek, The Christian Science Monitor, The Boston Globe, The St. Petersburg (Russia) Times and dozens of other media outlets around the globe wrote stories about WorldBlu List companies or published the WorldBlu List in its entirety, reaching over 36 million people worldwide.

"Organizational democracy is inevitable," comments Fenton. "The Internet, Gen X and Y's quest for meaningful work, and the Gallup Organization's report that 73 percent of US workers are disengaged at work are all causing businesses to rethink their management models and embrace a more democratic style. The organizations that practice democracy in the workplace are creating the businesses of the future and will ultimately build a more sustainable and democratic world."

WorldBlu, Inc. is a Atlanta-based leadership and business design studio specializing in organizational democracy and freedom-centered leadership. Founded in 2003, WorldBlu works with CEOs and executive teams to design, develop, and lead the most successful democratic companies in the world. For more information, visit the WorldBlu website at http://www.worldblu.com.

WorldBlu, Inc. is a Atlanta-based leadership and business design studio specializing in organizational democracy and freedom-centered leadership. Founded in 2003, WorldBlu works with CEOs and executive teams to design, develop, and lead the most successful democratic companies in the world. Each year it publishes the WorldBlu List of Most Democratic Workplaces. For more information, visit the WorldBlu website at www.worldblu.com.