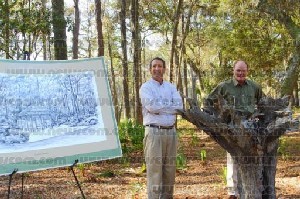 Land has great value because it is fully entitled for development

Dec. 10 /CSRwire/ - BLUFFTON, S.C., Dec. 10 /PRNewswire/ -- Officials of Palmetto Bluff and South Carolina Governor Mark Sanford dedicated here today 120 acres along the waterfront of this residential and recreational community as a conservation easement -- thereby shielding it in perpetuity from development.

Called River Road Preserve, the valuable acreage sits on the eastern edge of Palmetto Bluff and fronts both the May River and Cooper River. The easement will be held by the non-profit North American Land Trust.

"The acreage includes a mile and a half of waterfront and is of great value because it is fully entitled for development," noted Jim Mozley, President and Chief Executive Officer of Palmetto Bluff.

To commemorate the event Governor Sanford, Mozley and Bluffton Mayor Hank Johnston helped erect a bluebird nesting box on the site. Governor Sanford pointed out that the easement further advances statewide goals of land preservation and natural resource protection. "This conservation easement is a big deal, not just for Bluffton and Beaufort County, but for all of South Carolina," said Sanford. "It is heartening to see a developer like Crescent Resources take the initiative to protect our waterways, marshes and woodlands. They are to be commended."

The conservation easement is another in a series of initiatives that Palmetto Bluff has taken to protect its natural environment and in particular the waterfront along the May River. In 2003 the community recorded a conservation easement of more than 600 acres along the headwaters of the May River. The 20,000 acre community also includes a managed forest that encompasses more than 6,500 acres.

"This is very much a continuation of Palmetto Bluff's commitment to natural land preservation and environmental stewardship," Kennedy said. "Basically this land will remain as maritime wilderness and offer further protection for the estuarine systems."

The North American Land Trust, which has been granted oversight responsibility for the easement, is a non-profit organization based in Chadds Ford, PA and currently holds in protection more than 60,000 acres nationwide.

Palmetto Bluff is located midway between Hilton Head Island and Savannah, Ga. It is surrounded on three sides by rivers and has been recognized internationally for its land-use planning. The community's developer, Crescent Resources is headquartered in Charlotte, NC and is the recipient of numerous awards for environmental stewardship. The company is a joint venture between Duke Energy, Morgan Stanley Real Estate Fund and the company's management.