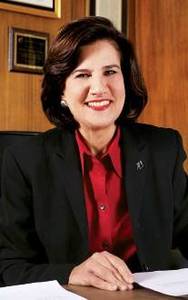 Jun. 16 /CSRwire/ - PHILADELPHA, PA., - June 16, 2008 - Big Brothers Big Sisters President and Chief Executive Officer Judy Vredenburgh will receive the Congressional Award's 2008 Keynote Horizon Award on June 19, 2008 in The Ronald Reagan Building in Washington, D.C. The Congressional Award presents the prestigious award each year to an individual who has contributed to expanding opportunities for all Americans and is setting examples for young people. Past Horizon Award honorees have included Wynton Marsalis, Arnold Schwarzenegger, Mariah Carey and others.

Under Vredenburgh's leadership, Big Brothers Big Sisters has strengthened the unique results-focused achievements of the organization’s 400 U.S. agencies. Big Brothers Big Sisters has been positively impacting children's lives for more than 100 years, as the most effective youth mentoring organization in the United States. The organization is making a measurable difference in the lives of American children through positive relationships that have a direct and lasting impact.

"It is encouraging that members of Congress, like so many citizens, recognize the problems too many of our youth face in terms of youth violence, high school drop out rates and poverty," Vredenburgh said. "Across the country, volunteers, alumni, staff, donors, and corporate and foundation partners are creating a network committed to supporting us as we make remarkable achievements toward changing how our children grow up in America."

Under Vredenburgh's leadership, Big Brothers Big Sisters has more than doubled the number of children served to more than a quarter million from 118,000 in 2000. According to independent research, children mentored by Big Brothers and Big Sisters are:

Vredenburgh joined Big Brothers Big Sisters in 1999 with twenty-nine years of management experience in both for-profit and nonprofit organizations. Prior to joining Big Brothers Big Sisters, Vredenburgh, whose professional career began in the retail industry, served as senior vice president with the March of Dimes Birth Defects Foundation, where she was responsible for revenue development and marketing. She serves on the Board of Overseers of the University of Pennsylvania School of Arts and Sciences and a member of the boards of Independent Sector and Generations United. Judy is a Big Sister to Sherice Holliman.