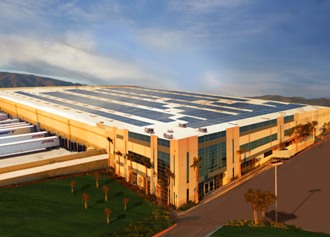 DENVER, March 27 /PRNewswire-FirstCall/ -- ProLogis (NYSE: PLD), the world's largest owner, manager and developer of distribution facilities, announced today that it has entered into an agreement to lease roof space to Southern California Edison (SCE), the largest electric utility in California, as a part of the utility's new solar power program.

In the initial phase of this program, the utility will lease
607,000 square feet of roof space at ProLogis' Kaiser Distribution Park in Fontana, California. The area will be used to install and maintain solar panels with the potential to generate enough electricity to power
1,426 households for one year. At the conclusion of the start-up phase, which will include five to 10 additional installations and is expected to be completed by the end of 2008, the utility will launch its full renewable energy project, aiming to complete 50 megawatts (MW) of solar panel installations each year for a total of 250 MW -- the largest U.S. facility of its kind. Each individual installation is expected to comprise one to two megawatts.

"This project has the potential to become a breakthrough solar energy program," said Jeffrey H. Schwartz, ProLogis chairman and chief executive officer. "We are thrilled to partner with SCE on their first rooftop solar installation and look forward to providing additional roof space as the project gains momentum, which will in turn support our own sustainability goals and leverage existing assets."

All energy harnessed from the installation will flow into the neighboring electrical grid and help meet Southern California's energy needs. As the largest industrial owner and developer in Southern California, ProLogis has the capability to support SCE's ongoing requirements and will help to fulfill the program's need for vast amounts of roof space -- the company owns 180 distribution facilities in SCE's territory comprising more than 41 million square feet, the majority of which are eligible for SCE's program.

ProLogis also has a total of one megawatt of solar panel projects installed or under development in Europe. At ProLogis Park Chanteloup in France the company has installed roof-mounted solar panels, generating electricity that is incorporated back into the local French utility power grid. In Spain, at ProLogis Park Penedes, the company installed
state-of-the-art, amorphous silicon solar panels that produce electricity using a wider spectrum of light than traditional crystalline technology, thus enabling maximum output.

"Our experience to date in France and Spain has shown that we can effectively use rooftop solar panels to generate environmentally conscious, renewable energy, meeting the needs of local communities while also enhancing the return on investment from our properties," said Jack Rizzo, managing director of global construction at ProLogis. "Our agreement with SCE is the first of its kind in the United States and lays the groundwork for similar programs throughout the country. With more than 500 million square feet of roof space worldwide, we see continued potential in harnessing the power of solar energy from our rooftops."

An Edison International (NYSE: EIX) company, Southern California Edison is the nation's largest electric utility in California, serving a population of more than 13 million via 4.8 million customer accounts in a 50,000-square-mile service area within Central, Coastal and Southern California. The utility leads the nation in renewable power delivery, procuring about 12.5 billion kilowatt-hours of renewable energy per year.

ProLogis is the world's largest owner, manager and developer of distribution facilities, with operations in 118 markets across North America, Europe and Asia. The company has $36.3 billion of assets owned, managed and under development, comprising 510.2 million square feet (47.4 million square meters) in 2,773 properties as of December 31, 2007. ProLogis' customers include manufacturers, retailers, transportation companies, third-party logistics providers and other enterprises with large-scale distribution needs. Headquartered in Denver, Colorado, ProLogis employs more than 1,500 people worldwide. For additional information about the company, go to www.prologis.com.

ProLogis is the global leader in industrial real estate, with operations in 118 markets across North America, Europe and Asia. The company has $36.3 billion of assets owned, managed and under development, comprising 510.2 million square feet (47.4 million square meters) in 2,766 properties as of December 31, 2007. ProLogis' customers include manufacturers, retailers, third-party logistics providers and other enterprises with large-scale distribution needs. Headquartered in Denver, Colorado, ProLogis employs more than 1,500 people worldwide.