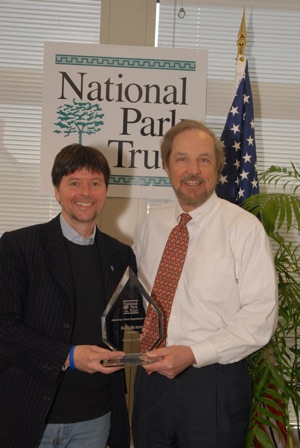 - March 5, 2009 - Acclaimed director, Ken Burns, became the co-recipient of the National Park Trust's first 'American Park Experience' Award for his work on the new documentary series: The National Parks, America's Best Idea. The Award was presented at an intimate setting hosted by NPT Board Chair, F. William Brownell on March 4, 2009 in Washington D.C. The film's writer and co-producer, Dayton Duncan, also received the award at an event hosted by NPT on February 4, 2009, where an exclusive preview of the film was aired.

In accepting the award Burns said that, "our film celebrates the beauty of these parks and the vision and foresight of the men and women who made sure that this land would be preserved." The six-part documentary will be aired this September and traces the birth of the national park idea in the mid-1800s and follows its evolution for nearly 150 years. Over six years in the making, Burns says, "the heart and soul of the film is not just a history of the parks but about our emotional connection to them."

NPT Board Chair says, "I believe that Ken Burns' work will touch and inspire many thousands of viewers about the importance not only of preserving and protecting our National Parks, but also the need for our generation and successive generations to witness and learn first-hand about these natural treasures."

With more than 40 million people expected to see the film, Burns stated that through educational outreach, he is committed to reaching diverse populations who may not have an historical connection to the parks. Burns believes that the film will encourage people to visit the parks, and he wants to ensure that all Americans understand that "we together own some of the most spectacular real estate in the world."

NPT is also committed to connecting children and their families with the parks. As part of that commitment, NPT launched a program called 'Where's your Buddy Bison been?'. It is a national public service initiative which encourages children to go to the parks with their Buddy - NPT's stuffed animal mascot - and send NPT stories and photos of their experiences. NPT board member, Diana Leon Taylor, gave Burns his own Buddy Bison at the event. Burns plans to take Buddy to his 4-year-old daughter, who has already visited at least six national parks.

NPT created the American Park Experience Award to recognize an individual or group that has made outstanding contributions to enhance the awareness and appreciation of our nation's parks, wildlife refuges and/or historic landmarks. NPT is honored to present the first award to both Ken Burns and Dayton Duncan.

Ken Burns is known for his filmmaking style of using archival footage and photographs. Among his most notable productions are The Civil War, Baseball and Jazz. Burns' documentaries have been nominated for two Academy Awards and have won seven Emmy Awards.

"¨The National Park Trust is a nonprofit organization, and the nation's only organization dedicated to the completion, and the full appreciation, of the American system of National and State Parks through the identification of key land acquisition needs and opportunities, the convening of potential funders to acquire these lands, as well as increasing efforts to ensure that future generations appreciate and experience this national heritage.

The National Park Trust is a nonprofit 501c3 organization. NPT is the nation’s only organization dedicated to the completion, and the full appreciation, of the American system of National and State Parks through the identification of key land acquisition needs and opportunities, the convening of potential funders to acquire these lands, as well increasing efforts to ensure that future generations appreciate and experience this national heritage.