The gold jewelry market is transitioning from a cash-to-trash economy to a regenerative one. 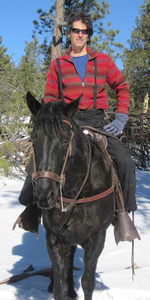 I earned my MBA in Cité Soleil — just outside of Port au Prince, Haiti. It was offered as a numinous blessing from a hunched up old woman wearing rags. That was 1985, a year and a half I spent living and volunteering with Richard, an American dentist. We set up mobile clinics among the shanty shacks, wafting in the stench of sun-scorched sewerage, rotted vegetables and meat markets.

Richard would diagnose and inject the anesthesia. I would do the extractions and suturing. Sixty in two hours.

The old woman, hobbled up to me, opened wide. She had one single tooth. She brought her finger to it -- wiggled it loose in her gum. The tooth was made of gold. I looked inside, behind the tooth, at a pallet of rotted black bone with a hole deep into her skull up to her brain.

I had been in country for over a year and had witnessed worm-filled cancers, starvation, chronic fistulas, and bodies on the street. Seeing this woman was finally, too much. I excused myself, found a semi-private place and broke down.

Later that morning, I extracted the tooth and gave it to her.

Even now, as a jeweler, I wonder, did the gold in that tooth come from some child miner in Peru, who

sifted through the mercury-laden water — long dead from mercury poisoning? Was it robbed from the tombs of Egyptian pharaohs, mixed with the pawned earring of a Parisian gypsy?

Was the gold from the Congo, sold for arms before it landed in optic white Switzerland? Was it a mixture of gold from 500 difference sources?

The Nature of Business

Her offering floated into my consciousness through numinous breath, giving me a perspective reaching from the heavens to the center of the earth, through my spine. It was a satori experience into the true nature and consequence of international business. Business is, after all, about relationship, and what concerns me most is the nature of those relationships.

When we say, “that’s business,” is it a justification for what in other contexts would be considered psychopathic behavior? The stock market roars up. Another 30,000 species will go extinct this year and income will be further concentrated in the hands of the one percent.

If someone calls me a good businessperson, should I be insulted or complemented?

This woman for me has become a modern day Haitian Sojourner Truth. She is one of billions of silent people who have walked this earth and perished in the mysterious creation and destruction of Life.  She is a North Star around which my business perspective wheels, offering permutations of various questions, such as: what about the relationship between my material wealth and the gold that ends up in the wedding rings I sell.

The Nature of Gold Mining

Even before the Egyptian pharaohs, gold has always had great value. For the alchemists, gold was

essence, the final state of the transformation of human consciousness into its immutable perfection.

Symbolically, it still represents radiance, the Holy Light, the sun. Gold is also the foundation of modern capitalism, a sought after investment, that has created great social migrations and built entire civilizations.

Gold mining is one of the most destructive activities on earth. Enough gold exists already to supply our needs. Besides high profile projects drawing opposition, such as Bristol Bay in Alaska, 13 percent of the world’s gold production, an average of 330 tonnes per year, is supplied by artisan small-scale miners.  Typically, they live in impoverished conditions and their gold mining activities rely heavily on mercury, which poisons them and their environment.

The gold from the average wedding ring causes 20 tons of toxic sludge at a mining site. However, in February, 2011, fair trade gold was introduced. This is the only gold worth mining, because the mining is done under strict environmental, human rights, labor principles and standards.

Right now, a wedding ring means one thing to the wearer and something else entirely to the greater human and ecological community. Over 50 jewelers in the U.K. and European countries already produce products with fair trade gold. A few jewellers in North America also offer fair trade gold rings. But it has been difficult to get this gold in the U.S.

Now, supply chains are in place that will soon make this gold easily available to any American jeweller and a robust fair trade gold market in the U.S. would uplift communities of hundreds of thousands of

From Cash-To-Trash to Regenerative Jewelry

The old woman’s gold tooth is somewhere out there, melted into the supply of gold circulating around the world. Perhaps a micron is in the piece of jewelry you wear right now. Many jewelers have been focusing on product made from recycled metal. But fair trade gold has transformative, alchemical power.

Over time, as people recognize the connection between their personal economic power and the larger web of life, the jewelry sector may change from a resource cash-to-trash economic model, to an economy based upon regenerative principles. We need to increase the impact of these new economic approaches that allow us to uplift small communities in the developing world.

Jewelry is a highly emotional and symbolic product, a repository of artistic culture and tradition.  Soon, the marketing of jewelry will not only be about seduction, romance and bling. We have a new story emerging. Jewelers will be able to tell their customers about how their purchase of a fair trade gold wedding ring is creating a more beautiful world.

Once the market is established, other products — fair trade diamonds and gemstones will also come to market.