What Does Corporate Responsibility In Burma...

Companies and investors need to do better than existing laws require if they are to act responsibly in the new Burma. 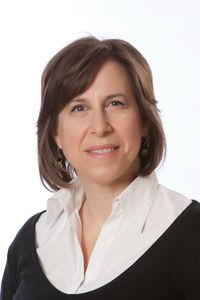 There is a lot of news swirling around these days about Burma, today’s big frontier market.

Democratic reforms that were inconceivable just two years ago have all the markings of real change:  the release of hundreds of political prisoners, the re-registration of the once banned National League for Democracy party, which in the April by-elections won 43 of 44 contested seats, the proclaimed end of “press scrutiny” with the elimination of the Press Scrutiny and Registration Department, the legalization of trade unions, the return of the license of a Burmese lawyer who had been disbarred for defending clients in political cases, Rangoon’s announcement that it would abide by the standards of the  Extractive Industry Transparency Initiative, and the government decision to abandon the official government exchange rate and instead float its currency, which is expected to reduce corruption.

In response to these changes, Europe, then Australia and Canada, and most recently the United States announced the suspension of economic sanctions and the resumption of economic ties.  Furthermore, the International Labour Organization voted in June to restore full membership rights to Burma. Each of these announcements carries the explicit hope and expectation that foreign investment can support positive political change by spurring economic growth and development, and supporting a fledgling democracy.

It can, but will it?

There are too many examples of newly opened economies whose workforce and natural resources have been exploited for profit in the rush of foreign investment. And the results for the investors and local stakeholders alike are not pretty. As analyst Brian Klein explained in Foreign Affairs:

“In these countries, which usually lack fiscal discipline and strong monetary policy controls, often times there are wild swings in exchange rates, money supply, and inflation. A lack of standards increases the likelihood of creating financial bubbles as banks race to lend. A raft of questionable real estate projects, a familiar problem for Thailand in the late 1990s, often follows. The sudden inflow of foreign direct investment may recede just as quickly at the first sign of instability.”

During a speech to the Annual Meeting of the World Economic Forum in January, Burmese democracy 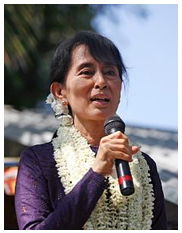 leader Aung San Suu Kyi, called for legislative and judicial reforms that would bring “ethical, new and innovative investment.”  Then, following the lifting of sanctions and the prospect of a flood of investments, in a major speech in Bangkok she struck a more cautionary note, telling her audience that investment in Burma should be a force for good in Burma.

Investing As A Force For Good,  Insisting On Transparency

What does it mean to invest in Burma so as to be a force for good and not bad?

In her Bangkok speech Aung San Suu Kyi defined bad as fueling corruption and inequality, and good as creating jobs and training workers. Urging “healthy skepticism” she pinpointed the problem of a lack of an independent judiciary:

“Good laws already exist in Burma but we do not have a clean and independent judicial system.”

In speeches and press interviews in Europe later that month she turned her focus to the lucrative oil and gas sector, where the worst corporate-related human rights abuses have occurred. In particular, she singled out the government-run Myanma Oil and Gas Enterpise (MOGE), whose revenues support the Burmese military and which has been accused of committing mass atrocities against ethnic minorities, including killings, displacement, forced labor, and rape.

Aung San Suu Kyi insisted that MOGE be more transparent about what it does with its profits and abide by the code of conduct of the International Monetary Fund. She also asked countries to refrain from allowing their companies to partner with MOGE until it agrees to abide by international standards of transparency and accountability.

This gets to a key concern human rights groups have with the lifting of sanctions all at once and without restrictions: you cannot enter the Burmese market, which has been closed to Western businesses for over 20 years, without partnering with locals – yet that translates into partnering 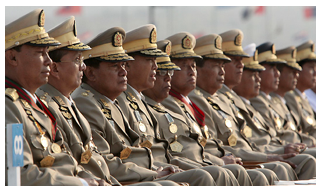 with the military, which has long controlled the business sector.

They point to the Burma section of the Treasury Department’s “Specially Designated Nationals” (SDN) list, which names human rights abusers, drug traffickers and others whom U.S. citizens are barred from doing business with: out of date and incomplete, the list provides little assurance that companies will be prevented from partnering with rights-violating entities.

The just announced reporting requirements that accompanied the lifting of sanctions by the U.S. government authorizing businesses to contract with MOGE, so long as they report it, have drawn fire from human rights groups and observers like Asia hands Michael Green and Daniel Twining. They say the Obama administration’s “rush” to allow companies to invest in the energy sector monopolized by MOGE is imprudent and  flies in the face of the democracy leader’s appeal.

Reporting is essential to ensure that business practices are transparent – and the requirement should be a no-brainer for companies. But the requirements have a number of weaknesses that cannot be overlooked.

First, the requirements make undertaking a human rights impact assessment and establishing policies and procedures for safeguarding human rights optional – if the company has no such due diligence in place, it simply needs to indicate so. This laxity about due diligence of American business about corporate human rights potentially puts the U.S. government at risk of being in violation of Guiding 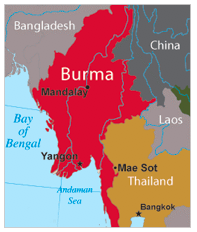 Principle 3 of the UN Guiding Principles (pdf), the reigning international standard on business and human rights.

Moreover, lacking an accountability mechanism for abuses that may be discovered the reporting requirements do nothing to prevent or deter complicity by companies in human rights abuses. And the ability of companies to identify reports as “privileged and confidential” denies financial investors and the broader public access to operational, legal and reputational risks.

Companies Need To Do Better Than The Requirements

Now that the official floodgates have opened for corporate investment in Burma, the onus is on companies to act responsibly, reduce risks, avoid complicity in rights abuses, and be a force of good. This calls for companies to go well beyond the laws established both by their host countries as well as Burmese laws. Here is what corporate responsibility in Burma looks like:

Before entering Burma, companies must have in place well-articulated safeguards to prevent human rights abuses and business plans to promote inclusive business that will bring positive returns to the Burmese people. These safeguards should be clearly communicated, as should their implementation.   Financial investors will demand it, civil society will hold companies to it, and businesses themselves ought to want to make that a reality.

Most importantly, after nearly four decades of brutal military dictatorship, the Burmese people deserve it.